I landed in Dallas Fort Worth and my Buenos Aires flight got delayed.

“Buenos Aires, Buenos Aires!” A lady in a purple vest shouted. 4 of us from the SFO flight went to her and she gave us directions to go to Gate D33. We knew our flight was delayed (originally scheduled to depart at 7:35 pm) for the next morning. We thought we would get a meal voucher and a hotel room. “Sorry, it’s delayed due to weather so we can’t give you that.” Darn. A guy (I think he’s Argentinian) came up next to me and listened to everything the AA employee was saying. He too wanted to know what was going on.

So there we were and we met another guy in line going to BA too. Jenny, Claus, Gabriele, and Byron. We were in a group circle when another guy came up to us and started speaking to Gabriele and Claus in Spanish. “We got bunk beds and make sure you get food because they close at 10 pm.” He’s been here for 2 days already. And he started giving us a tour of the whole terminal. Not going to lie, I definitely needed the laugh and it was actually quite entertaining! I’m super nervous though that my flight tomorrow morning will be again delayed or worse, cancelled.

We were all chatting on the cots with our Au Bon Pain sandwiches and Mexican food, when a lady came by with a cart full of sheets. Yes! 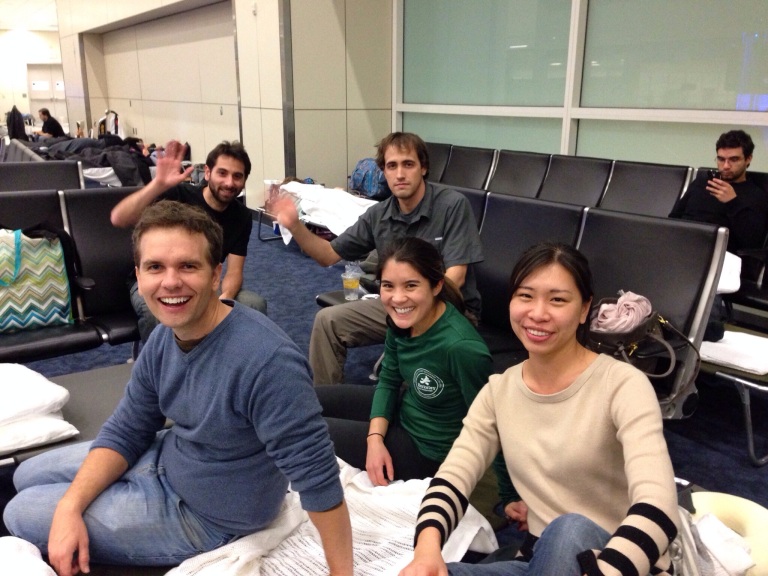 I went to charge my cell phone and heard from Byron (travelled a lot in the Navy) all the places he recommended I visit: snowboard in the Hakkoda mountains in Japan, visit the Ryusendo caves, see the old western-feel town of Virginia City, Nevada, go to Pyramid Lake, and hike along the Pacific Crest trail.

All of us chatted more and it’s time to get some sleep.

Status update: It’s 5:35 am. We’re up and awaiting on whether our flight changed. Please take off.

Got 3 hours of sleep. It’s hard to get some zzz’s when you have CNN playing at top volume right near you. Dad, being a pilot later called me and predicted that we would still take off. He said it might be 10:30 or 11 am instead of the rescheduled 9 am, but that we should still make it.

We can’t miss this flight. Jenny and Claus are vacationing in Argentina before they go to Claus’ brother’s wedding. Byron is moving there for work. And Gabrielle doesn’t want to miss his niece’s birthday (not sure if he already missed it). I can’t miss this. If so, I’ll miss my flight to Ushaiai. Kathleen is planning to meet me at the airport. Originally I was going to meet Kim in the airport and we were going to explore Palermo until the Winter Wonderland of Dallas happened. It’s unbelievable. I’m running into people who have been here in the airport for 3 days! 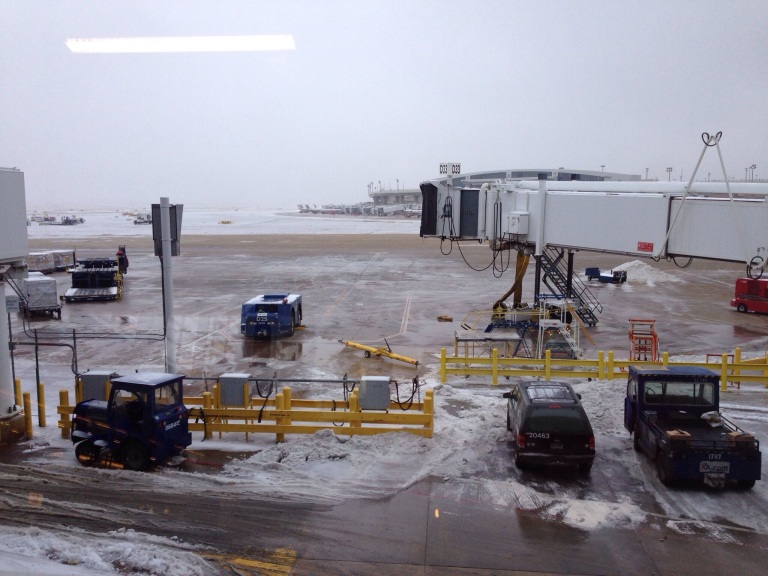 So fortunate to have met new friends here at the airport. Even though we all want to go to BA as soon as possible, it has made waiting much more fun.

Status update: 8:20 am and according to American Airlines, the flight is on schedule and we’re planning to depart at 9 am! I took a look at the departures screen and it honestly looked like 80-90% of the flights scheduled to depart are cancelled. So happy that we’re actually leaving. I was in line with a bunch of other passengers and a guy was like, “We made it. Yay!” It was that same guy who had stood next to me at the counter last night. Haha, good times. Great to see smiles and faces of relief all around.

I’m on the plane now and Kathleen is in Miami. Dad was right, we actually departed at 10 am. We’re set to land about an hour apart each other (Kathleen is supposed to arrive an hour before me and will wait for me) and then we’re going to head to the other BA airport (AEP) and spend the night there to catch our 5:15 am LAN flight.
….

Kathleen’s flight got delayed and doesn’t arrive till 2:25 am. We have to catch our flight at AEP and take a 1 hr shuttle to get there. It’s midnight right now. I’m going to wait for her and take the 3 am shuttle but I’m not sure if she’ll even make it through customs and baggage claim by 2:45 which is when the shuttle meets to leave. I’m so tired. Exhausted in fact. And seriously, no one speaks English! Ahhh. And neither Citi nor HSBC is taking my debit card to withdraw cash.

Yes, she arrived! They were getting ready to board the shuttle. I rushed to Kathleen and pushed $16 in her hand to buy a ticket. But there was a line so we decided to take a taxi with 2 others (Kathy and Durward) who are on our boat tomorrow and jetted to the airport. We were all so stressed. But running off of adrenaline. We got there on time, checked in our baggage and went to the gate where we met Kim. The flight took off and we landed in Ushuaia and took a taxi to our hostel. We dropped off our bags and are now in a cafe, eating toast, eggs, and croissants with coffee and tea, as well as taking advantage of the wifi. Kim is teaching herself Spanish and Kathleen left something in the taxi (we were such in a rush) and trying to contact the taxi company. We’re about to explore Ushuaia – from the plane and the quick taxi ride it looked absolutely gorgeous.