“Here ya go, you’ll like this one,” my friend pulled the book, Into Thin Air off his shelf. I read it and was in awe of mountaineers attempting the tallest mountain in the world.

But that’s not what made me go to Everest Base Camp. It was sort of a last minute decision. On the TMB with Mich, people talked about the trail, Weisen mentioned Annapurna, and to be honest, I really wanted to go to Asia during my 3 months off. So 4 weeks prior to jetting off to Nepal, I booked the trip.

I had heard two totally different thoughts: a) Everest Base Camp (EBC) is a piece of cake and b) it’s one of the hardest hikes people have ever done. And when in Nepal, I kept hearing the latter.

What I was most nervous of was the altitude and the cold. I wasn’t sure how cold it was until I arrived in Kathmandu and heard from folks that it’s freezing. And oh how right they were.

But it was epic. And different from any other trek I’ve been on. What I like most about it is the culture – you see “Nepal” everywhere – the prayer flags along the mountain passes and the bridges, the Nepalis people all through the villages and at the tea houses, the food – dal bhat (which is so good at first and then you get tired of it TBH), the monasteries and shrines, and then there stands Everest.

I decided to arrive in Nepal a day before our group was set to meet just in case of flight delays, etc. That had happened to me with Antarctica where I was stuck in the Dallas airport. They gave everyone who was stranded (some for days) a cot and sheets so we’d have a bed. But I arrived on time in Kathmandu in the afternoon, checked in to my room and went to explore. I was so jet lagged from the 24 hour journey but still decided to go to Durbar Square and wandered the streets.

The next day I took a taxi (all the beeping reminded me of India) to Swaysmbhunath Temple which is the Monkey Temple. It was gorgeous there! And full of monkey shit.

That afternoon I went to a scarf shop and met Katharine. She was leaving Nepal in a few days after having spent months there teaching English. We spent about an hour in the scarf shop and the owner invited us to chai tea. “I’m not trying to do business with you,” he said, “just join me for a cup of chai.” And he asked his son to bring us some and the little boy came back with 3 cups of chai. It was delicious and Katharine practiced her Nepali with him. She then asked me if I wanted to have lunch with her and when I said sure why not? she took us to OR2K, then to the Pilgrims book store and a paper store and tea shop. I had met a complete stranger from the UK but a new friend and can’t wait to see what project or role or travels she does next after she returns home. 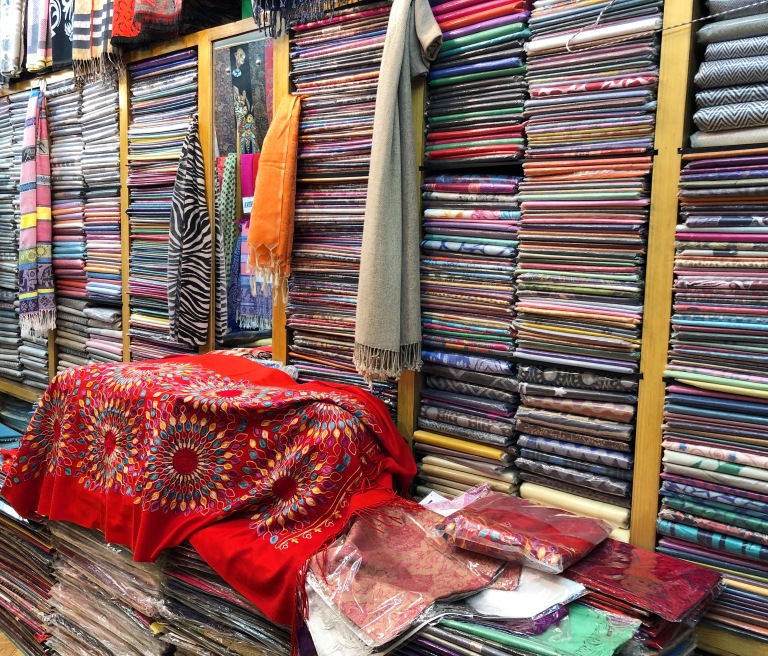 That night we had our briefing meeting. Our trek guide basically told us to expect the worse. And the day before a girl on his trek told me this was the hardest trek she’s ever been on in her life. And Katharine told me it was super cold. Sooo…I’m thinking what did I sign myself up for?! Having done no prep work for this trek cause I was like, well TMB, Ecuador, I should be fiiiiiine. And the only additional clothing I had bought for this trip was a pair of warmer hiking socks.

Day 1:
Flight at 6:10 am into Lukla airport which is the world’s most dangerous airport to land in. But success! We hiked a little but not much, ending in Phakding. It was fricken cold at our tea house. We all gathered around the heater – put in more coals! But I can do this! I thought to myself. Geez, I hope I can do this.

We had an AMAZING group: Libby was my roomie and she was also from the US. Heather from Canada. Jenny, Tina, Bernadett (originally from Hungary), Tom and Katie from the UK. Johannes, Franzi, Manuel, and Emily from Germany.

Day 2-3:
Hike to Namche Bazaar. Up and up but not bad at all. We went to the Everest Bakery – free Wi-Fi and free charging! Had their apple pie which was delicious. We stayed here 2 nights. The second day we walked up to Syanboche. The lodging at the tea houses are simply a bed and (most of the times) a blanket plus you bring your own sleeping bag. There’s not a lot of insulation so it gets pretty cold at night. 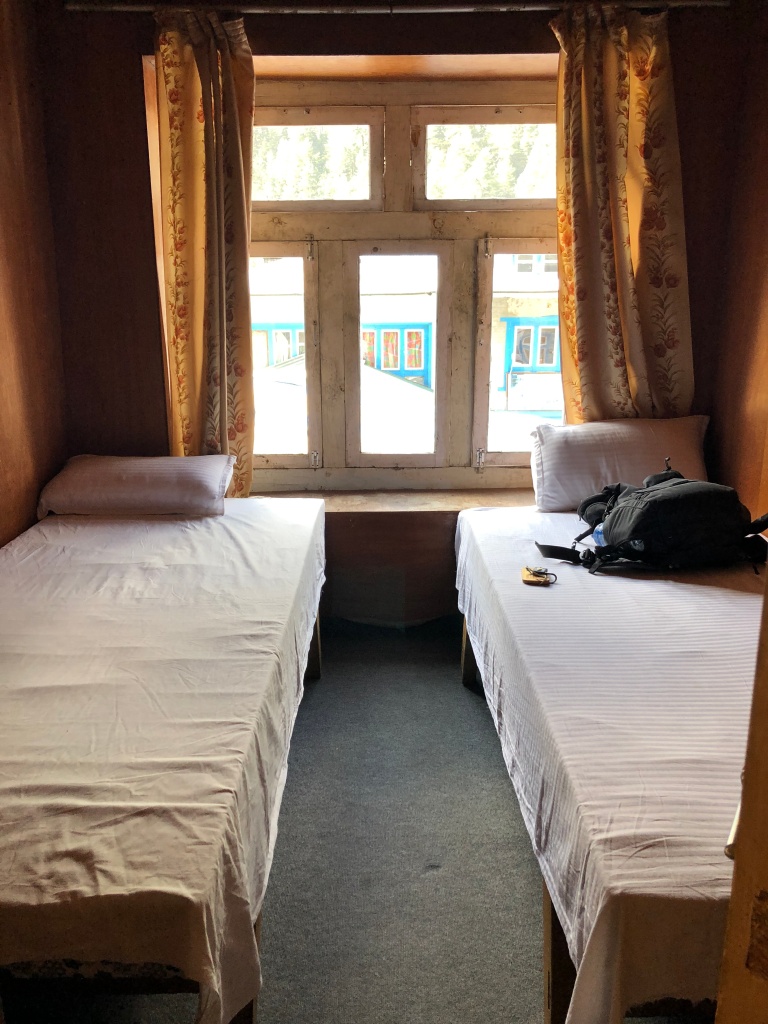 Day 4:
Hike to Tengboche to acclimatize. Identifiable by a monastery. Had garlic soup (which is supposed to help with the altitude so we were always eating it) and momas (dumplings) for lunch. And OMG had a shower, thank God. Full of stars at night! 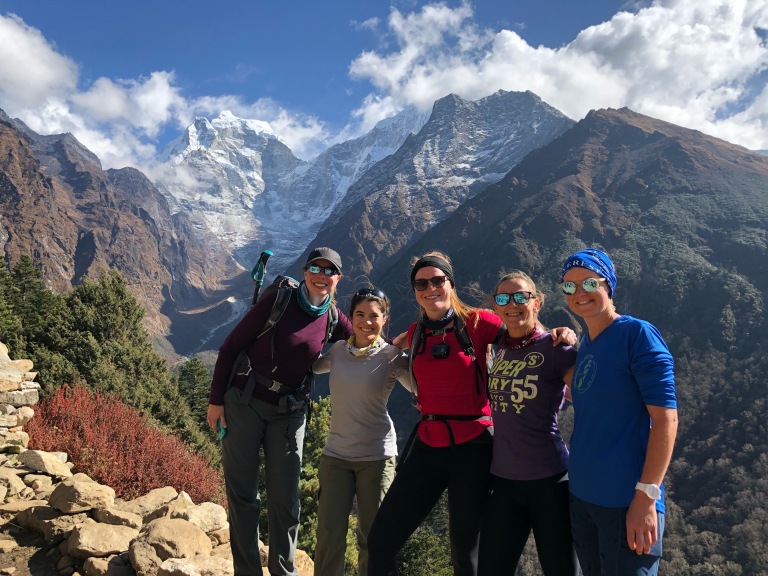 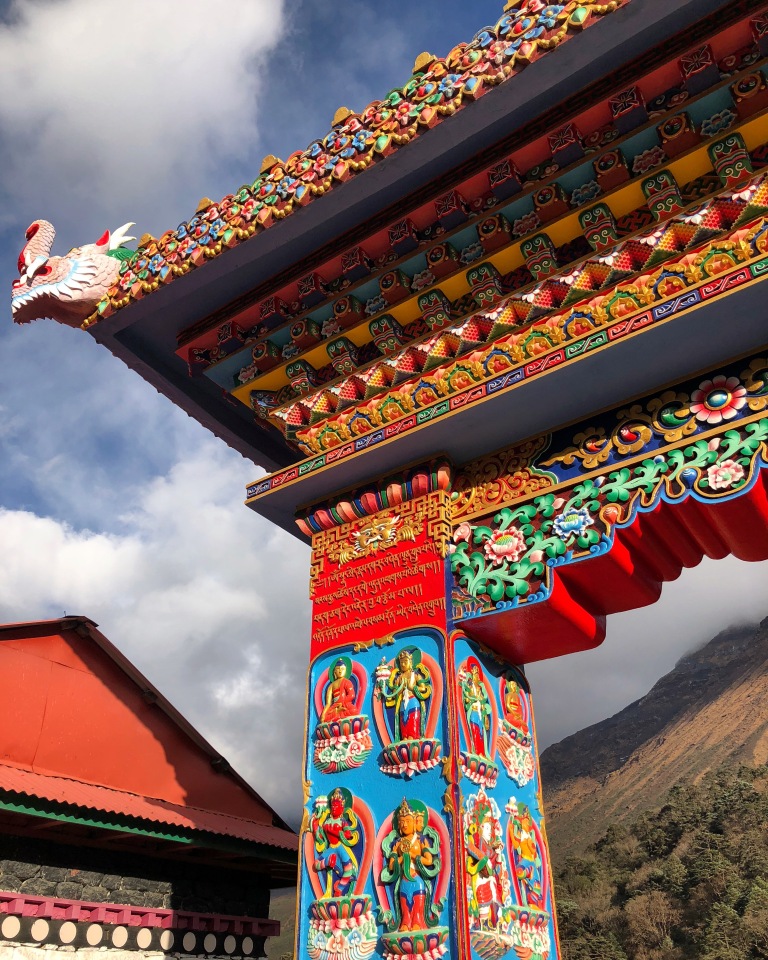 Day 6:
Still in Dingboche. Hiked to Nagarzhang. Second shower. Watched a documentary on a 2008 Everest climb in which one guy died. Had the apple custard pie which was pretty good and they charged my phone a little bit. No Wi-Fi which is nice to disconnect for a few days. Cold at night and I have a stuffy nose. Hoping to sleep well tonight. The views on today’s hike were gorgeous. Finally surrounded by mountains yay. 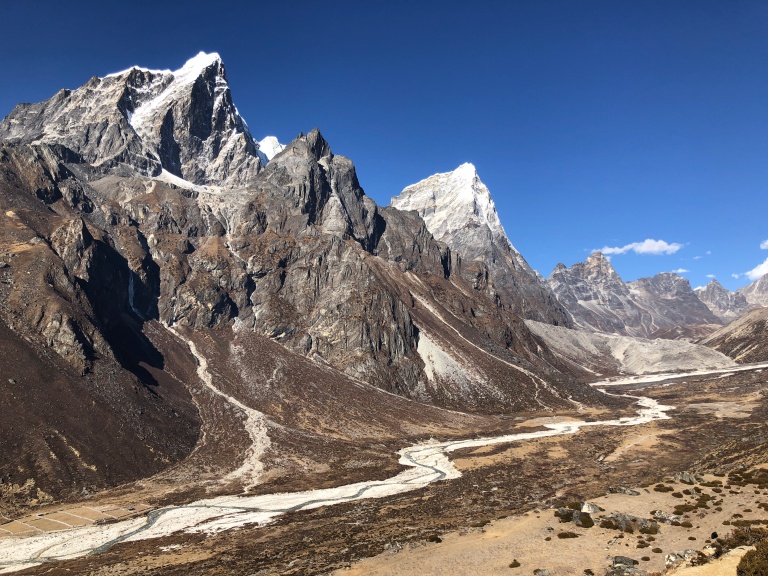 Day 7:
Hike to Lobuche. Mid-way point saw a memorial dedicated to sherpas. But also there were memorials for Rob Hall and Scott Fischer. It was a pretty touching site. Was a favorite day of mine and the views were gorgeous. 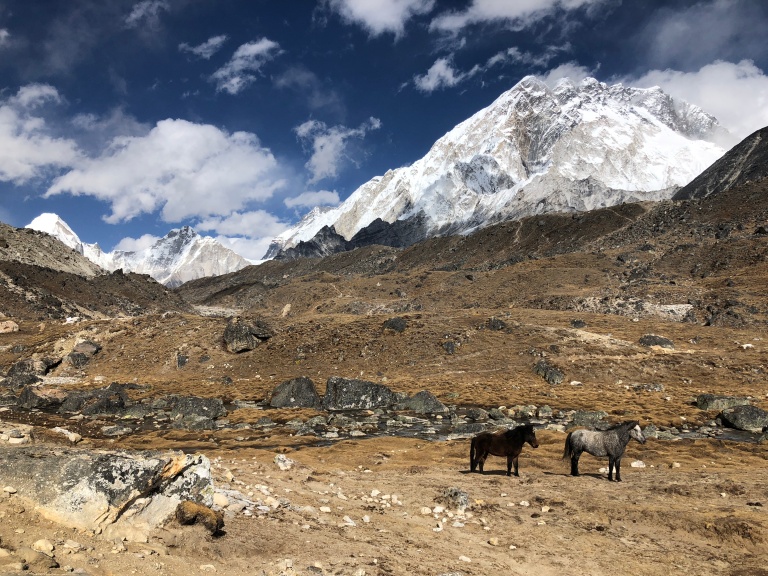 Day 8:
Woke up so sick. Let’s just say: 🤢 Was it the altitude? I hadn’t been taking any altitude pills. But I trekked to Gorakshep feeling so incredibly weak. Passed out at lunch.

And then had to go to Base Camp. And got sick again. But we made it, and I made it! It was incredible. We only stayed for 20 minutes taking pictures and headed back. It was super rocky – nothing like what I pictured to get to Base Camp. And honestly wasn’t too cold outside. So worth it! That afternoon we came back, I slept a couple of hours, woke up for dinner in which I had a few spoons of soup and went back to bed for 12 hours.

Day 9-10:
Descent! YESSS. aka more O2. We descended to Pheriche. Then through Pangboche and to Tengboche. Pictured is Gopal our awesome guide. 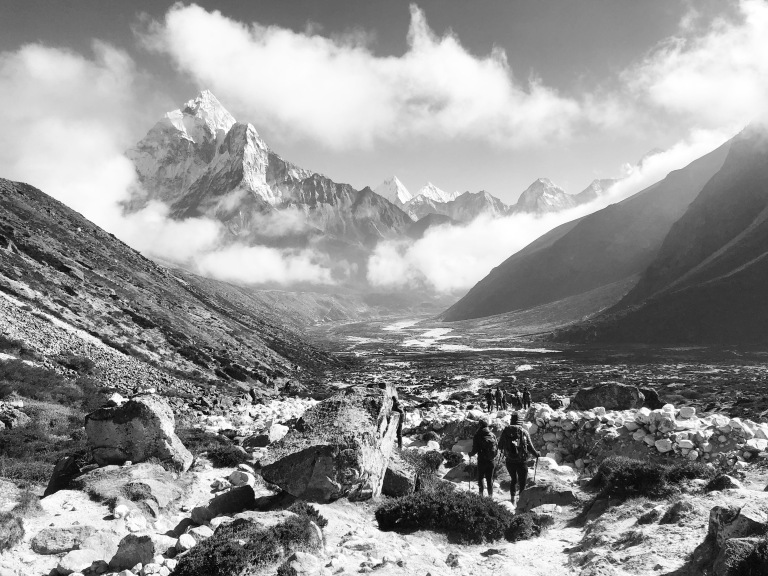 And rum. We’ll leave it at that.

Day 11-12:
We continued down and started hiking faster. Franzi and I tried to keep up with Manuel and Johannes as they were booking it. 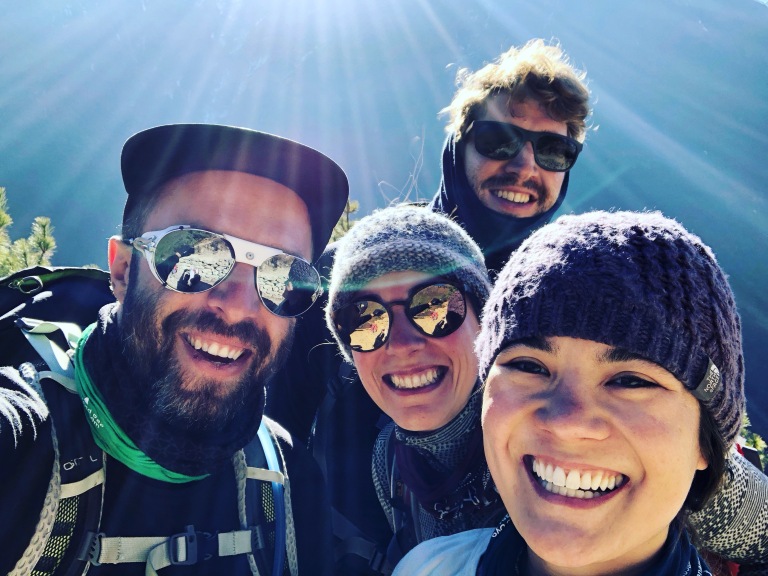 And we finally got to Lukla! Found an Irish pub. Wrote our names on the ceiling for proof we did the hike 🙌

But let’s be honest. We couldn’t have done this trek without sherpas. They carry heavy loads (some who work at companies which probably make them carry way more than they should – thankfully not ours) and we were super thankful for all they did. Each afternoon we got to a lodge, all our stuff was already there. They made this trek possible.

In Kathmandu, we shopped and shopped! I got my friend a North Face bag, and then took Libby to all the shops that Katharine took me too and got my scarves that the shop owner was saving for me, and he remembered me, which we discovered the Nepalis tend to remember the people they had talked to even a week or two prior. Flew back to San Francisco with many memories. #tripofalifetime

Going on this hike makes you really appreciate the little things in life: a warm bed, a hot shower, not having to BYO tp, food ready in minutes versus an hour and a variety of food instead of the same thing over and over again, and having what you need at your fingertips. But it’s trips like these that I want to keep going on – seeing different cultures, having amazing experiences, opening your eyes to the world beyond the bubble we live in. Adventures are the way to learn. And someone once said, “Of all the books in the world, the best stories are found between the pages of a passport.” So true and I’m super thankful to have gone on all my travels, and looking forward to more in the future.

4 thoughts on “Everest Base Camp Trek”