We’ve reached the Antarctic! We’ve passed the geopolitical boundary. Waves are just a bit less choppy so we no longer look like we’re hammered, but you still need to hold on to the railings. We walk a lot of stairs up and down (43 steps from the third deck to the sixth). Outside there’s a nice light snowfall. My first snowfall of the season.

Today we had a vacuum party where you take all your stuff that you’re going to wear in Antarctica and you vacuum anything out (pretty much what you’re looking for are seeds from other countries / continents). We brought the GWU towel too to photograph on Antarctica.

We also went to our first class on the IAATO (International Association of Antarctica Tour Operators) rules; they’re a code of conduct. See the “What I’ve learned” post – numbers 4, 5, and 6. To sum it up, they’re guidelines to prevent tourists from destroying the environment. We also had a class on penguins. Only four species of penguins are on the continent of Antarctica: the Emperor, the Adélie, the Chinstrap, and the Gentoo. The seven others breed south of the Polar Front. Currently they’re laying their eggs and we won’t get to see their chicks…expecting them to hatch in about 2 weeks time. Anyway, the macaroni one is the cutest.

5:40 pm and we have great views of the Antarctic! This is unlike anything I’ve seen. Kathleen keeps telling me, “When we first met as roommates, did you ever imagine that we’d be going to Antarctica?!?!” Truth be told, I never imagined myself going to Antarctica till two summers ago when I met a couple who did. 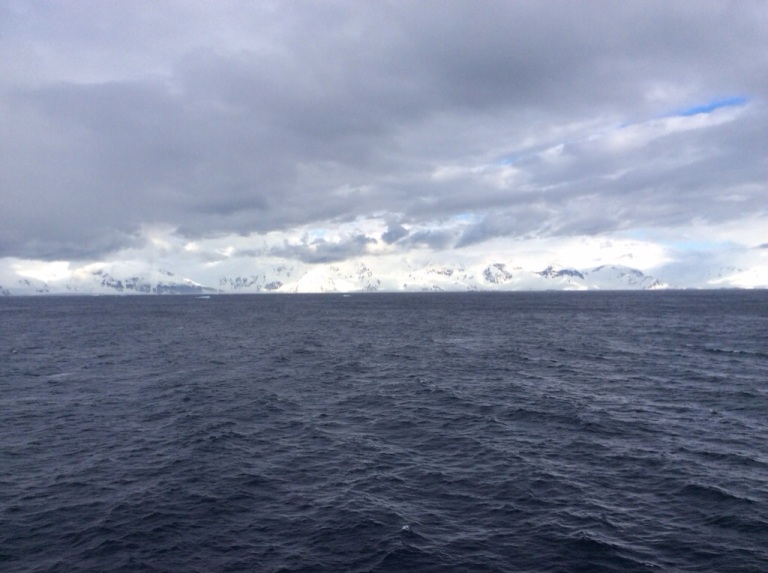 So who’s on board?
– Kathy and Durward: Durward is in the Navy and he took his mom Kathy on this trip…she seems pretty nice.
– Gautam (goes by G) and Jessica: They’re both from San Francisco. We hang out with them a lot – really nice, outgoing, and always a good conversation.
– John: He’s from Perth. We often eat our meals wand hang out with him at the lounge. He’s retired but was a biologist. In the lectures he always asks good questions. He’s a big traveler and I showed him my bucket list. He thinks I should add to it: swimming with whale sharks, doing a safari in Kenya (he once showed me all the pics), and going to Kruger Park in South Africa.
– Boris: He leads the way as the expedition leader. He always updates us with what excursion we’re going to do next among other expedition related stuff.
– Liz: She’s the assistant expedition leader…Boris introduced her as “the one who does all the work.”
– Yee: Yee is awesome. Enough said. Also…she’s traveling with her parents who are super sweet.
– Liz: (other Liz and Yoga teacher who’s also on staff) It’s really nice starting the day with yoga…more like simple stretches since the waves force the boat to go back and forth so you wouldn’t want to do sun salutations during Drake days.
– Meigan: She’s a staff member on board and usually teaches yoga (not for this trip though because she hurt her shoulder) and does massage. After this landing she’s pretty much exploring the world starting with Argentina and she’s also doing a yoga/wellness retreat in Costa Rica come January. She’s from PEI and lives in Halifax. That’s ironic…sounds exactly like my family except mine lives in Antigonish.
– Ashwin and Aishwarya: They go by Ash. They’re super nice and live in LA. We hang out with them quite a bit too.
– Guy dressed in a suit: There’s one guy on board who always wears a suit. He even wore it under his red Antarctica gear. Kim thinks that he might be wearing it because on other cruises, you wear suits. I guess he didn’t get the memo that this is an exploration type of trip, not dress to impress. The thing is, it’s the same suit…every. single. day.
– Steve: He’s British, and lives in London. Probably in his late 50s or early 60s. He’s super cool, and we bonded over the fact I went to school at the LSE for my study abroad year. I want to have the continuous desire to travel when I’m his age. He’s going home to his family after this voyage – you can tell he loves this trip but he’s looking forward to seeing his wife and two kids who are in their 20s (he explored Patagonia prior to this). He’s off to Tanzania in January, how awesome is that? His wife doesn’t like the cold, which is why she skipped out, but he’s looking forward to vacationing with her soon.
– Jason: He lives in Las Vegas, originally went to Arizona and then to UNLV and now in sales where he gets a lot of awesome sports wear from his clients…he’s always wearing a different team for a hat, jacket, or sweatshirt. Traveling with his uncle, Bill who’s really cool too (actually, a lot of people are traveling with their family…maybe I can convince my parents to take a trip to Antarctica one day as I want to come back) and they’ve been planning this trip for about a year. Offered me some hand warmers when my fingers were about to freeze off one day outside. There’s actually a large group from Vegas here, particularly from UNLV.
– Amanda: She’s still in university but is taking some time off to work for One Ocean. She showed me what she calls her “happy spot” in Antarctica. We sat there for about 20 minutes talking about Antarctica and all the other places we want to visit someday (her’s included the Galapagos, Vietnam and Laos, and the Trans-Siberian highway), and spent another 20 minutes just silent taking it all in. It was a beautiful place to overlook.
– Steve: another Steve. He’s in a running club in Colorado and we talked a bit about running, sneakers, the Bend, OR Nationals championship, and marathons (though halfs are my sweet spot). I’m hoping to go to Colorado sometime for a run with him.
– Nate: He leads the kayaking here along with Liz. Always in a good mood with a smile on his face, and will say something where I think it’s true but in fact he’s just kidding.
– John Dudeney: He’s legend. He’s on staff and has two polar medals and is the single person who has been to a Antarctica the most times (25+ times). He knows a ton (he’s a historian). His two daughters are on this trip too, for the first time, so I think it’s a special voyage for him.
– Gannon: He owns everything University of Oregon. Traveling to Asia next – sounds like an awesome trip. Really cool guy. Traveling with his dad, Steve.
– David: This guy always has positive energy. He says that he’s an honorary GWU alum. He lives in San Jose, so David, G, Jess and I are planning to have a One Ocean reunion in SF.
– Barry and Hy-may: They’re from Cork…Barry is Irish and Hy-may is originally from Paris. They’re another awesome couple to hang out with.
– Simon: He’s a naturalist and is always pointing out the different types of wildlife to me. He always lets me borrow his binoculars. Simon remembers everyone’s name which is kind of impressive.