1. The Big Mac Index. Remember this? I remember first seeing this index in business school. It describes the purchasing power of countries…you basically get a feel of inflation. And Argentina has like 25%+ inflation! So the government asked themselves, “how are we going to solve this problem?” “Ah ha! We know! We’re going to charge the Big Mac at a super cheap price.” Go into a McDonalds and you can get a Big Mac for half the price of a combo. But seriously, where is that beef coming from? I’m not sure it’s coming from Argentinean cows.

2. People don’t take limousines here because a) there’s tension between classes and b) the new tax for luxury cars is 50%. And I thought California had high taxes (compared to New Hampshire at least).

Anyway, it was time to see a little bit more of BA…to experience the culture and to hear their history. So…here goes…

Porteños often like to over emphasize things. But don’t we all. Their famous liberator, San Martín, helped them achieve independence from Spanish rule. The Spanish army was still in Argentina, but San Martín crossed the mountains “by horse” to go to Chile. After going to Chile and Peru, he went back to Argentina with a really big army. People say that he crossed the Andes Mountains on a white horse, but it was in fact, a mule.

We saw palaces all over BA. Can you say $$$? At the beginning of the last century, there were 108 – wealthy families would build these palaces as their homes. Now, there’s only 32 remaining…I can’t believe they knocked these all down.

In 1916, the British community gave BA a clock tower, called “Torre Monumental” to commemorate the May Revolution. Way back, behind that clock tower you can see a port. But what’s the story there? BA decided to build a bigger port (the first one was way too small). 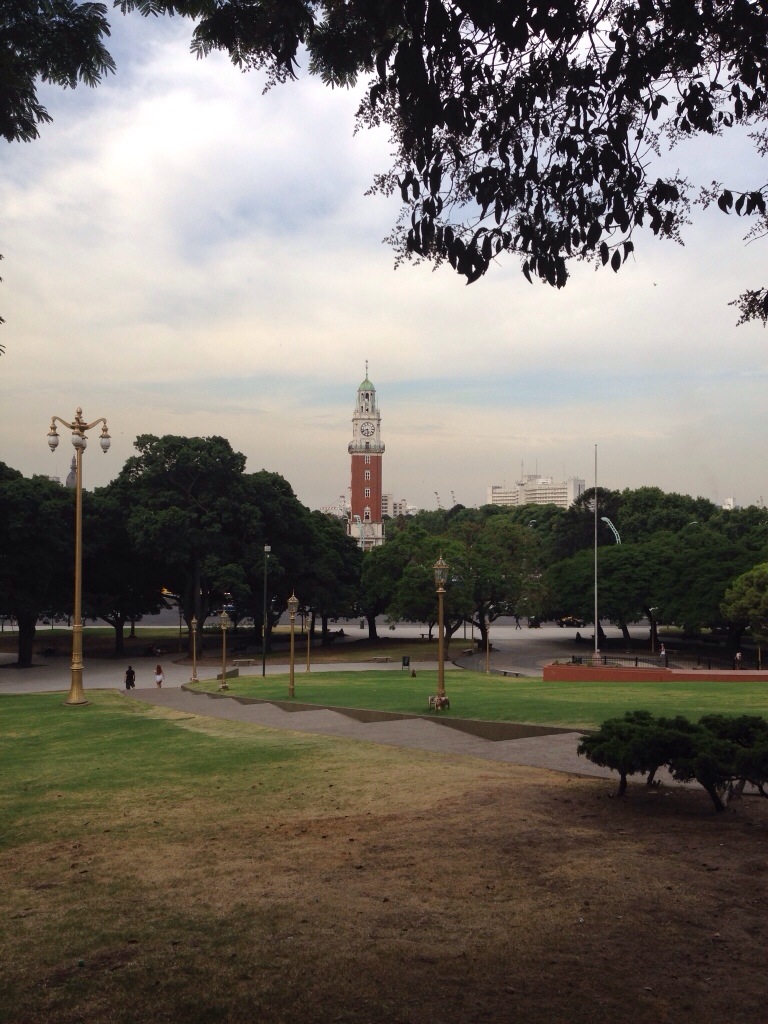 So speaking of the port…guess what the main export of Argentina is?
Answer: “Beef?” you may say.
Wrong!
Answer: “Soybeans”
Ding, ding!
You never would have guessed, right?

We then saw the Falklands War Memorial. The Falklands War began in 1982; it was a war between Argentina and the UK where they fought over the Falkland Islands and South Georgia (two places I would LOVE to visit after having gone to Antarctica…I heard it’s crazy with wildlife…not that I’m a big wildlife lover or anything, but I’ve heard from Simon it’s amazing). Anyway, in that war Argentina ended up surrendering 74 days later. Battle of territory.

Between 1880 and 1930, 10 million individuals came to Argentina. Boats were leaving with beef to Europe and coming back with immigrants, especially from Italy and Spain. They had to keep these boats going to Europe to keep up their export of goods, so rather than come back with empty boats, they brought everything they liked including balconies, gates, and fountains, which is why a lot of palaces have European influences (because they actually came from there). This palace here is all constructed from French materials. This palace has 4 sectors (floors), and on each floor there are 4 apartments. Each apartment is worth 2 million dollars. Yikes! 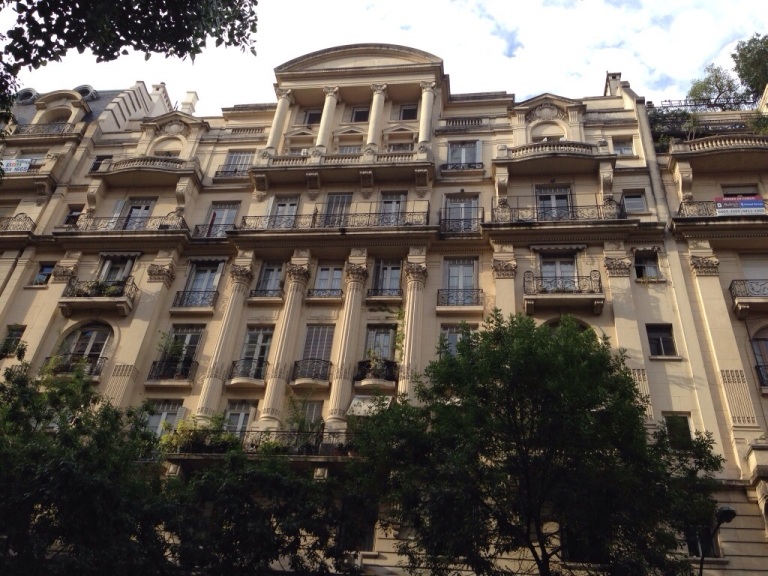 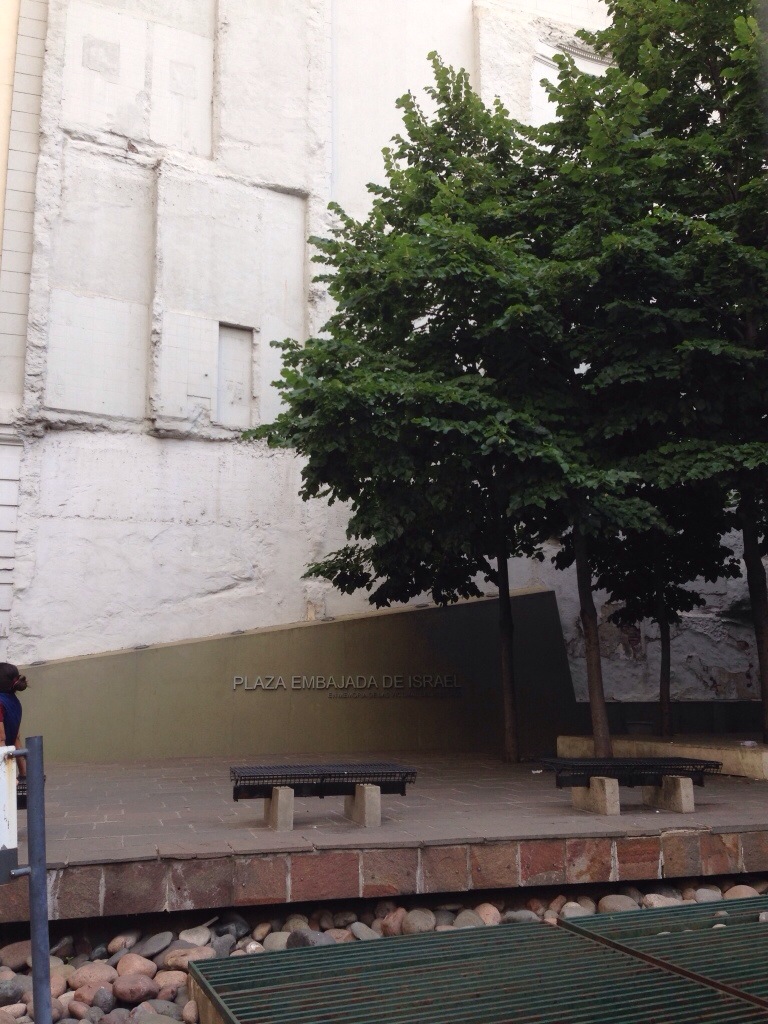 Okay…change of subject. Have you ever been to the Trevi Fountain in Rome and thrown a coin in it so guarantee a return trip? Yeah, I’ve done that. I think I made a wish when I went years ago. I forget what that wish was though…LOL. Well…if you want to come back to BA…drink the water in this plaza.

And check this out in this same plaza. This reminded me of Riga, Latvia. Aww – trompe-l’oeil! It’s not actually a building but a piece of art!

Did you know that there’s a ton of people who get plastic surgery in BA?
1. They’re obsessed with how they look apparently.
2. It’s very cheap.

Even if plastic surgery was super cheap, I don’t think I could ever go under the knife. Just last week, I almost fainted when getting my blood drawn for my annual physical…no joke. Eeek. So what’s the scoop with the healthcare system? In the public healthcare system, everything is pretty much free and the doctors are fairly decent. Our guide told us that the “middle class” chooses the private healthcare system where they offer you all sort of care which are “free” if you join, and included in that is plastic surgery. So there we were walking along Arroyo Avenue…filled with the rich and famous apparently. Okay…not really but kind of.

We journeyed over to Recoleta Park which has the 2nd oldest church in BA, the Church of Nuestra Señora del Pilar. There’s also the famous Recoleta Cemetary which has the tomb of Evita. Evita is a hero to Buenos Aires. She was the wife of Juan Perón, the president of Argentina. But unfortunately died at age 33 to cancer in 1952. During her life, she fought for labor rights as well as women’s rights to vote, and founded the women’s first political party in Argentina. She died on July 26 and 2 million people came to her funeral. In 1955, there was a big revolution again Juan Perón and Evita’s body went missing for 16 years. Supposedly a crazy doctor even took her body and he was obsessedly in love with her. Bit weird if you ask me…talking to a body when she’s dead…like night after night. Creepy. Her body now rests in La Recoleta Cemetery.