“Would you rather be in a tent on a cold, raining night on a campground in Patagonia with me, or on a sunny, Caribbean beach?” Kathleen asked us. “Just so you know, I will take this personally.”

It was wet, and we had just backpacked 3.5 hours with our 30 pound packs up to Campamento Poincenot , followed by a 2.5 hour hike along the river to see the glacier. Dinner was spaghetti with pesto that was sprinkled on from a package. It was one of the best dinners I’ve had. No joke…it was delicious.

“Would you rather travel to South America or Europe?” We’re already in South America and I would love to see more of Eastern Europe.

It was questions like these that kept us going on our journey. What did we do?
– Day 1: Backpack from El Chaltén to Campamento Poincenot (total of 11 km and 3.5 hours). Arrived at 4 pm. Set up camp. 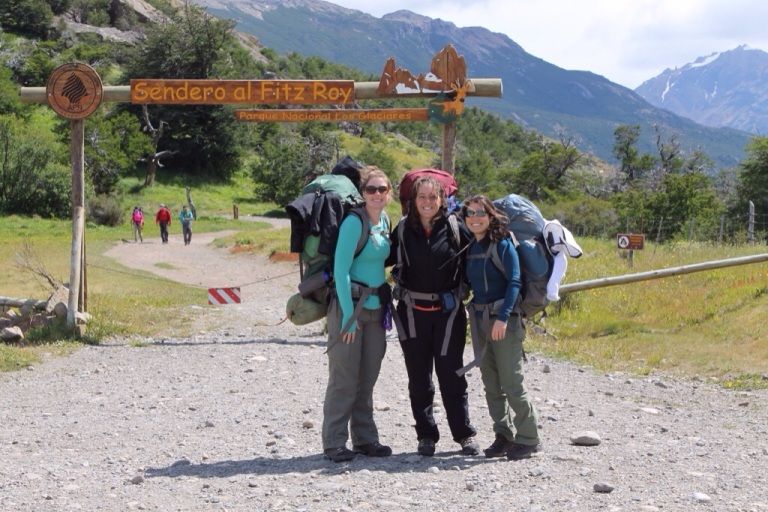 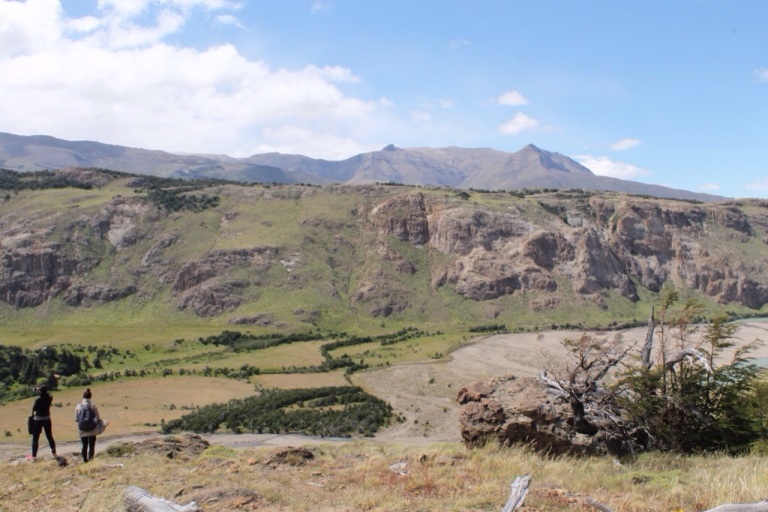 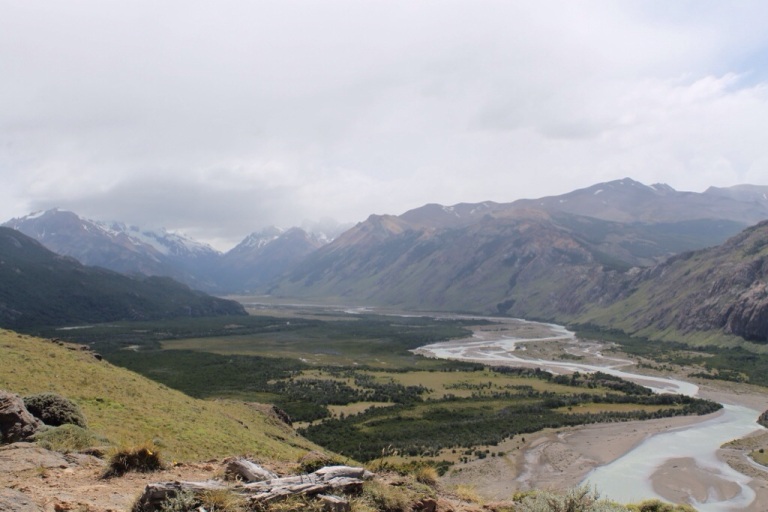 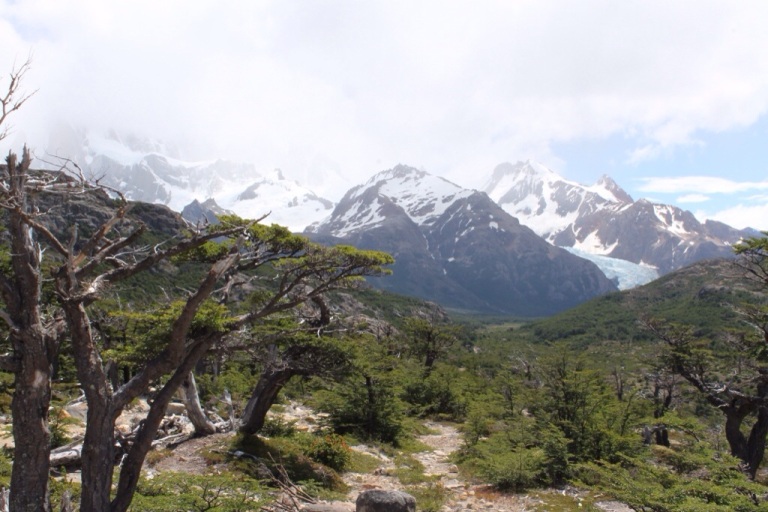 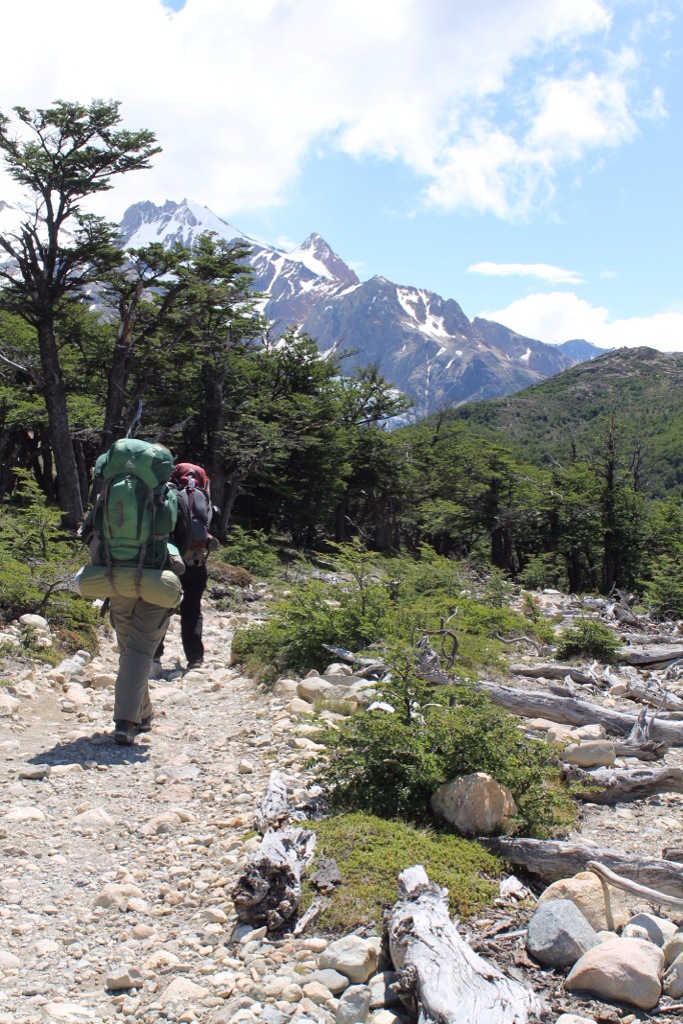 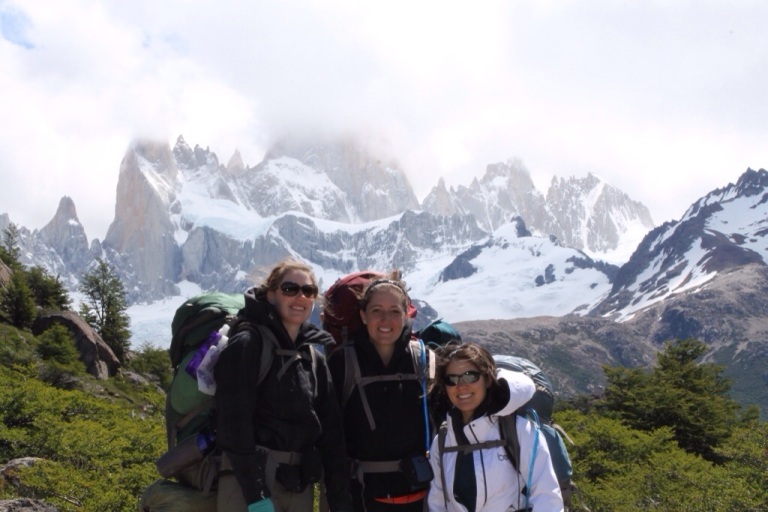 Then hiked to Lago Piedras Blancas to enjoy close-up views of the Glaciar Piedras Blancas (total of 2.5 hour hike). It was a gorgeous view. I lost my footing along the way back and one of my legs went off the trail. Kathleen picked me up like a dead weight. 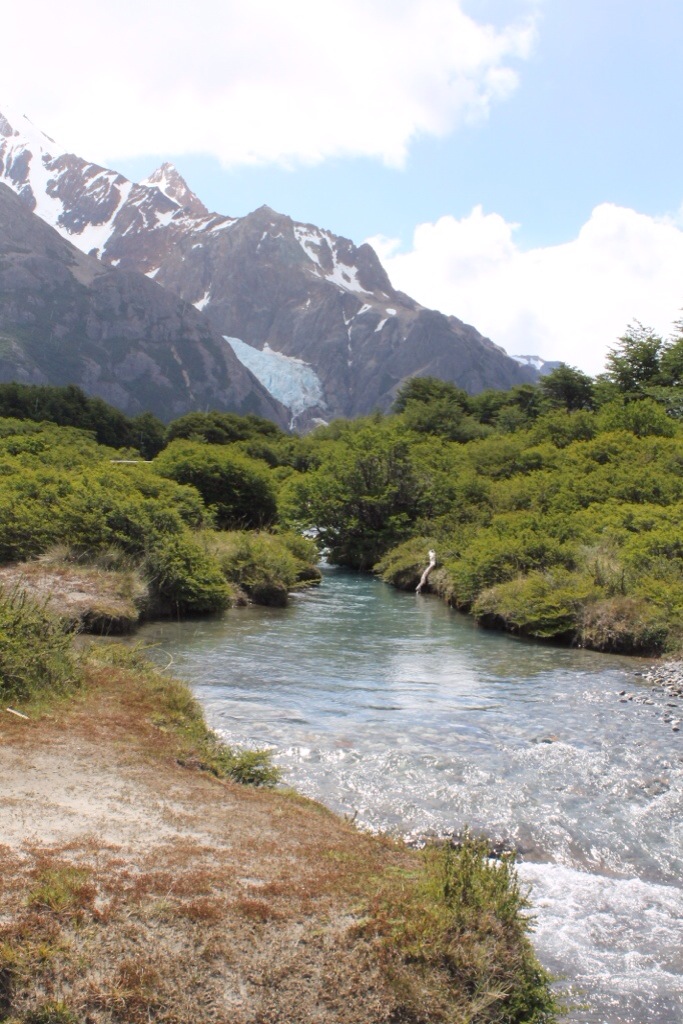 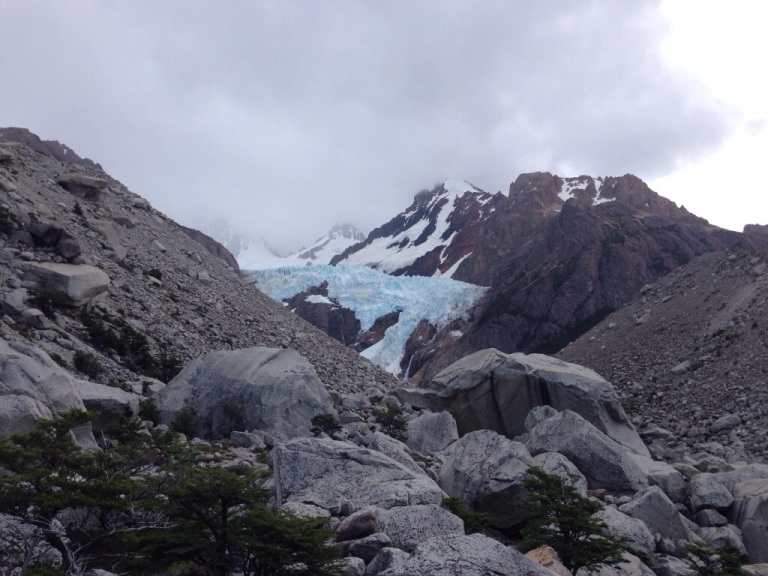 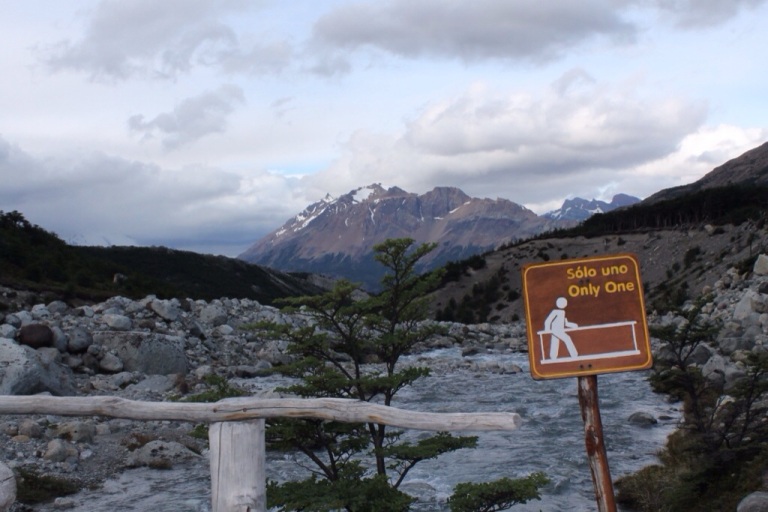 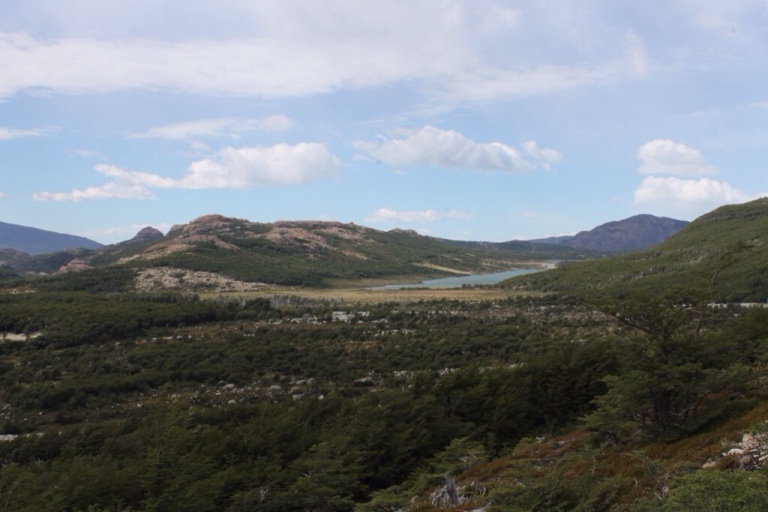 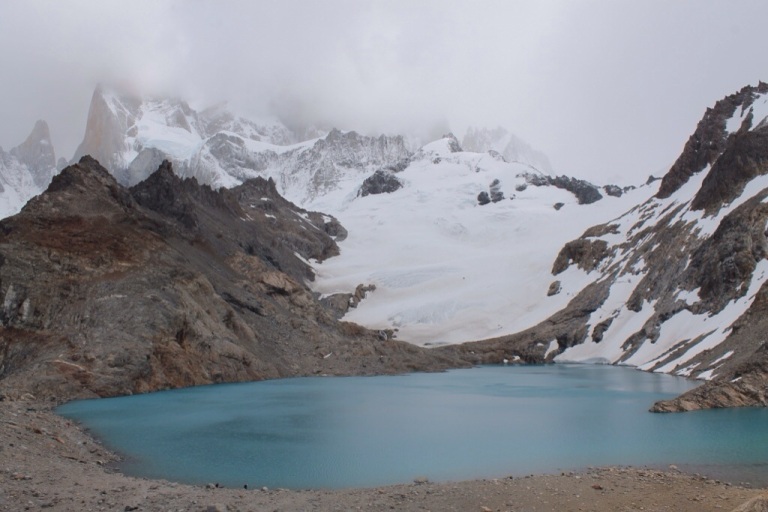 Returned to camp, packed up and backpacked to Campamento de Agostini (9 km but took 4 hours since we were tired from the day hike). We walked past the lakes to get there. 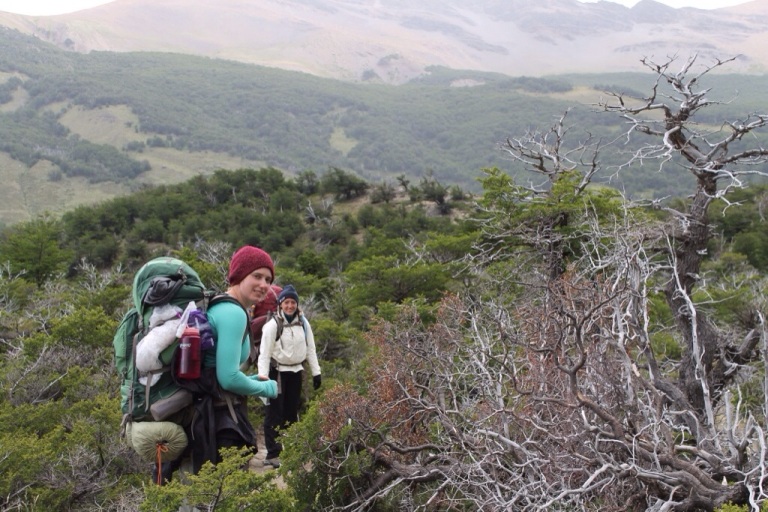 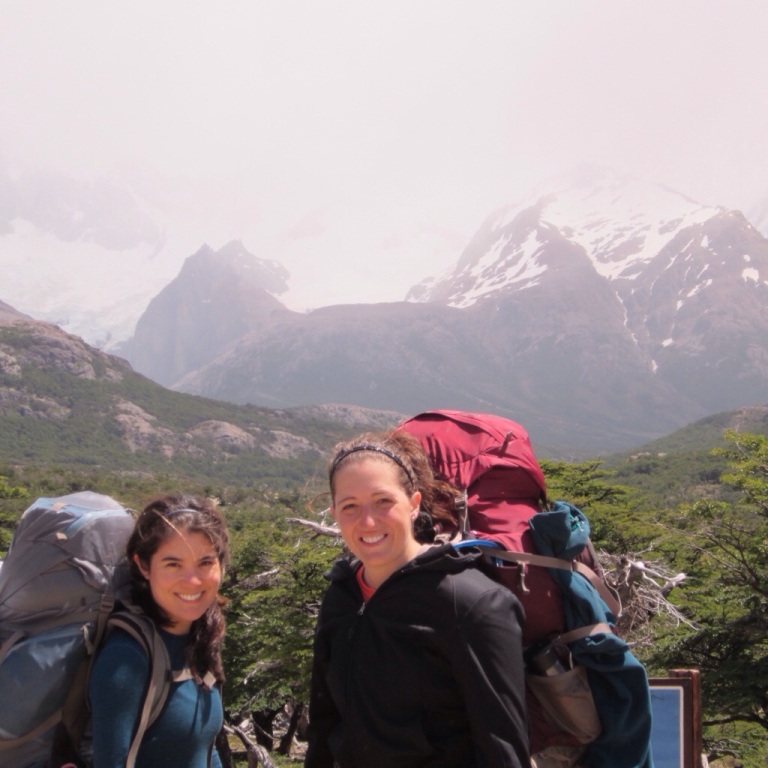 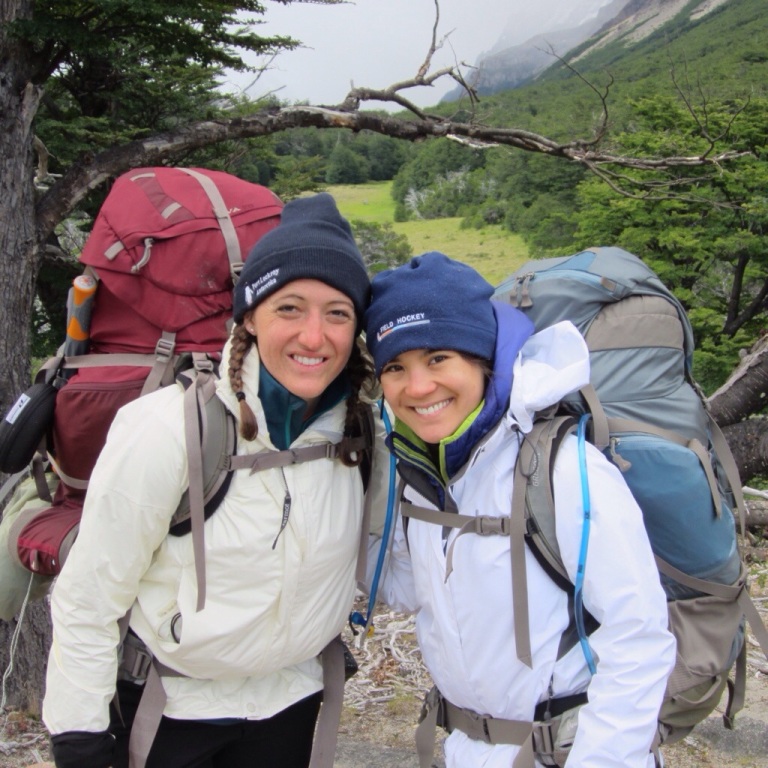 – Day 3: In the morning I went up to a rock and sat there for an hour to admire the views. 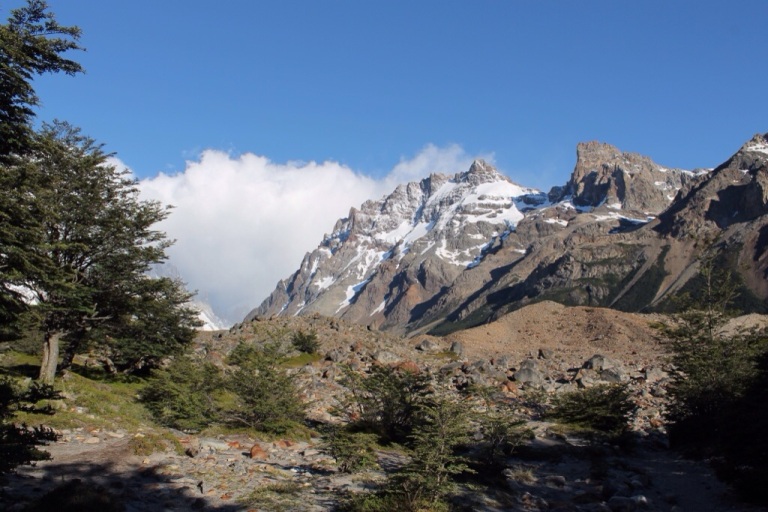 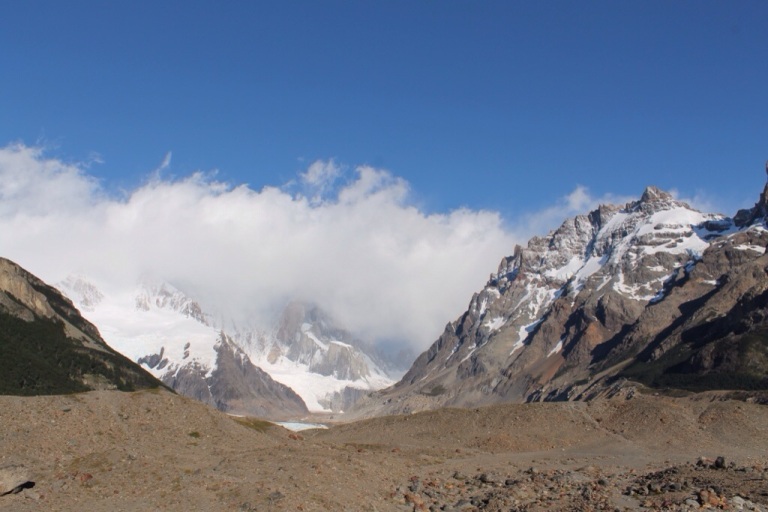 Later that morning we did a short hike to see Glaciar Torre which was right by us. 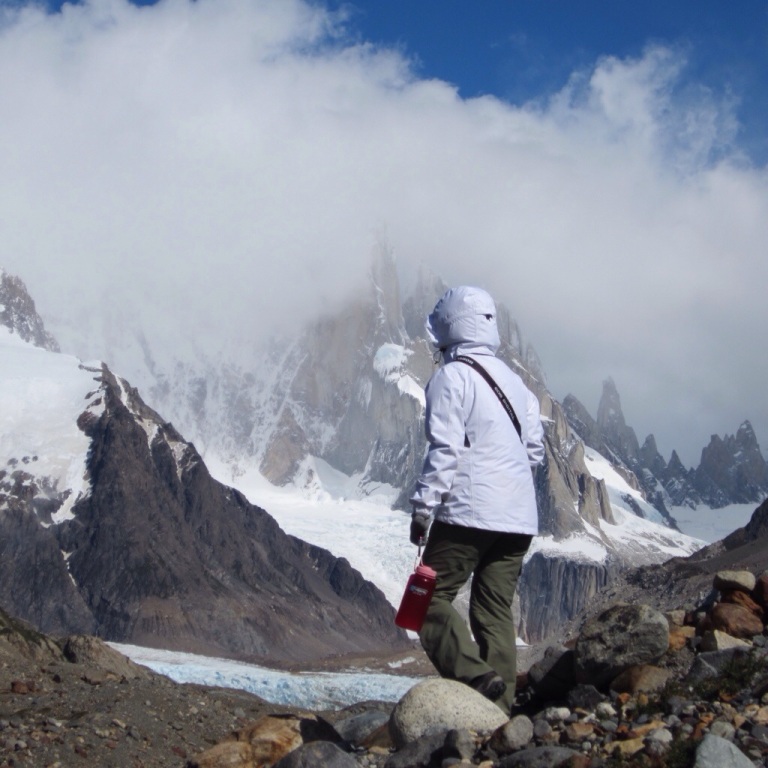 It was extremely windy! We then packed up camp and backpacked back to El Chaltén (12 km and about 2.5 hours). 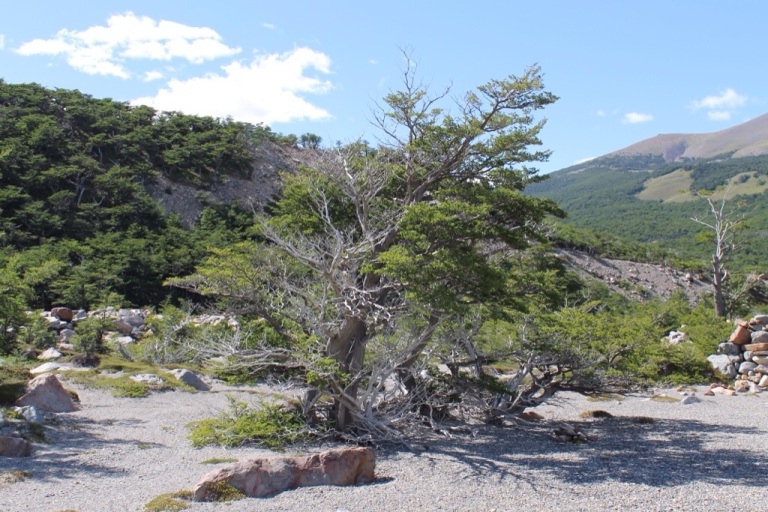 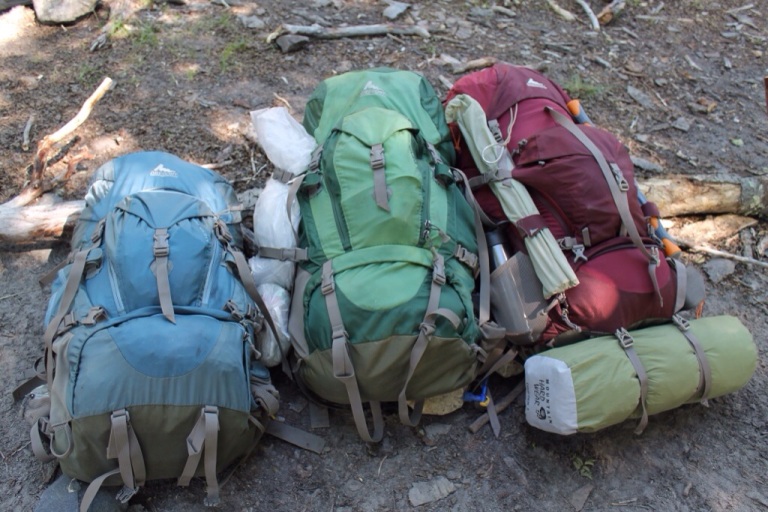 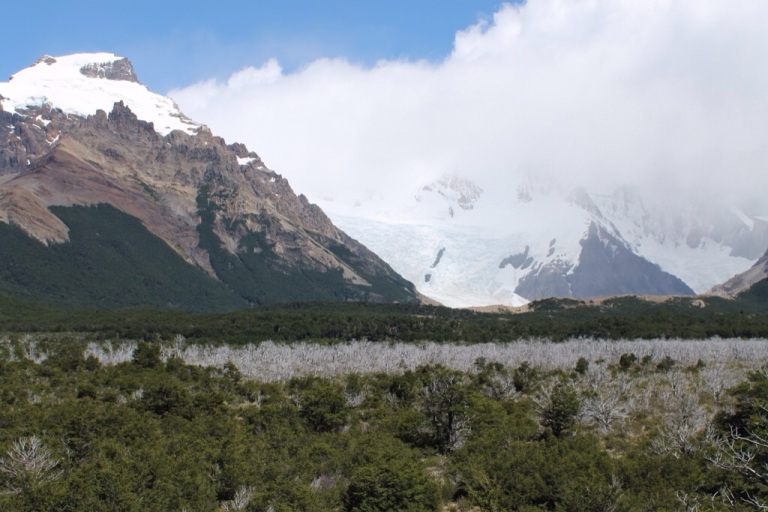 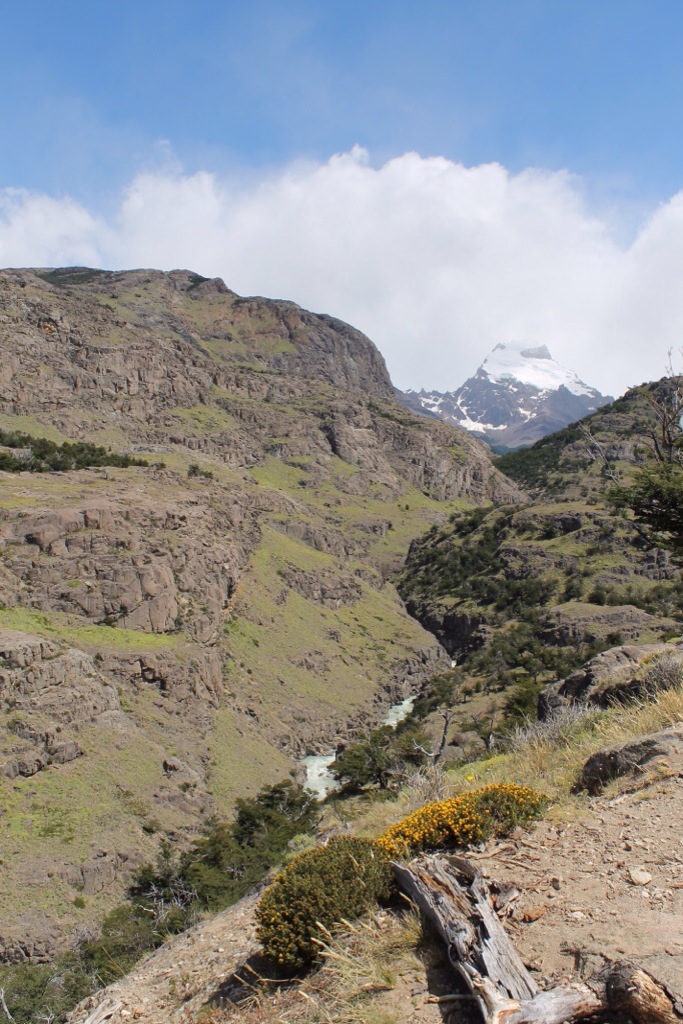 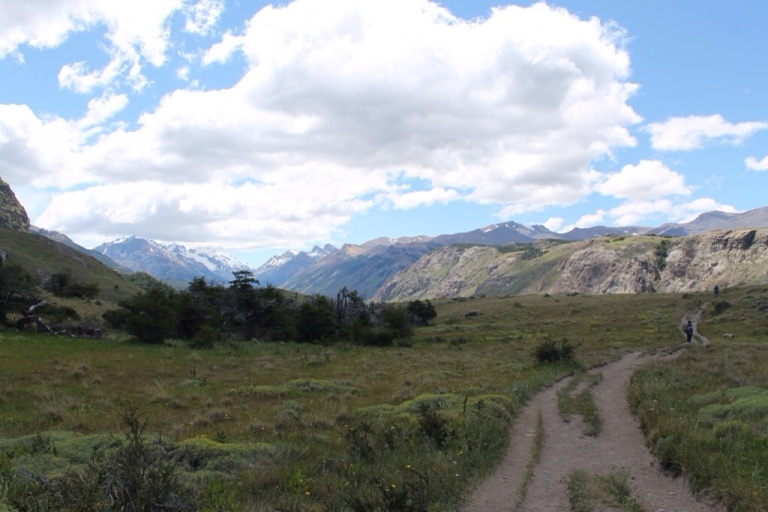 For some reason, Mount Fitz Roy decided to hide behind the clouds when we were there. Though the glaciers were pretty cool. 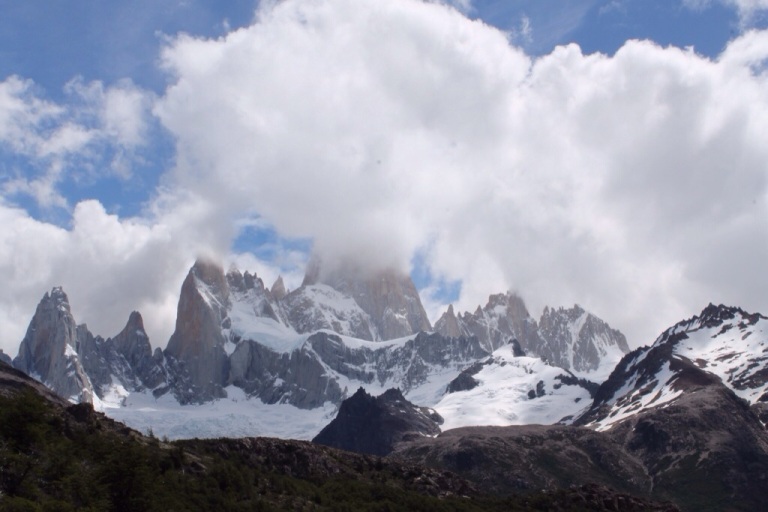 This was my first backpacking experience and I have to say it was pretty difficult! I am, though, very proud to have accomplished it and Patagonia being the first one as well. The weather in Patagonia varies so prepare for anything. It gets extremely windy, and it could start raining any second.

We ran into the same couples quite a bit during our journey. One was a Swiss-German couple, and another familiar couple who camped in the two same areas as us. Also at the airport we ran into a couple (I believe from Michigan) on their honeymoon who were then going to Chile after this part of the trip. We saw them: at the airport in El Calafate, on the bus to El Chaltén, on the street, at a restaurant, and on the bus back to El Calafate 4 days later. Yep. Small town.

We went to a microbrewery and I got a salad (yay, finally veggies!) and tea, and Kathleen and Kim each got beer. It totally hit the spot. 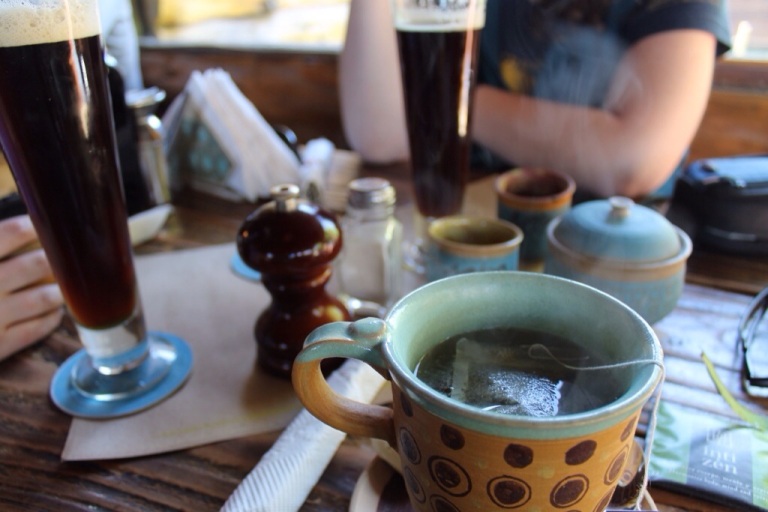 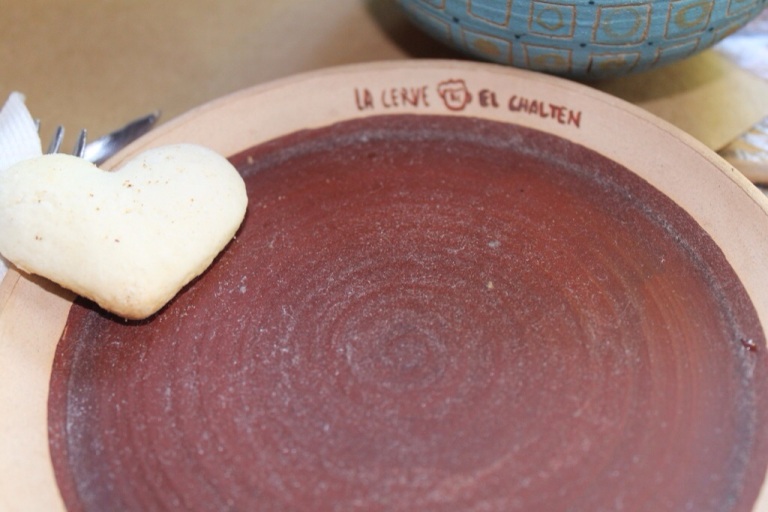 Kathleen went back to the hostel for a second and ran into the guy we were sharing our room with. I noticed when we dropped our stuff off earlier that day that he had a Boston Red Sox hat. Kathleen said he seemed nice and Kim was like, “Well did you invite him for dinner? It’s Christmas Eve, he probably doesn’t have any plans since he’s traveling by himself.” Kathleen felt guilty and Kim decided to go back to ask him (she also wanted another layer since it was cold out).

Our time at the pizzeria for dinner was entertainment for some. Kathleen and I held a table at a place called Patagonicus, but the lady soon got annoyed that we were waiting for Kim. We then saw Kim walk past the pizzeria in a rush and when Kathleen ran out to get her, Kim waved her hand no. She was then followed by the guy from the hostel and it looked like she was trying to run and hide from him. The guy then came into our pizzeria, went by our table and left. Kim was nowhere to be found. What the heck was going on? After what seemed like 20 minutes, conversations with a lovely US couple sitting next to us who thought Kim was falling head over heels for this guy (note: Kim is very happily with Stephen), and seeing this guy go back and forth from our pizzeria to the one next door and having conversations with strangers on the street, Kim finally came back to the restaurant. We were like, “What did you say to him and what happened?” We found out that she had asked him, he went back and forth and decided to come but had errands to run and would meet us at the restaurant, and then she was actually going down the street to try to get a gift for her dad before the shop had closed. Wow. That was confusing. The guy ended up coming back to our pizzeria and joining us, and we found out that he goes to Westminster College in Utah and taking a year off (just finished his freshmen year, but it sounds like he doesn’t want to go back to school) to volunteer. The bill came and we each got out our pesos to pay, trying to do the math. And then, all of a sudden, “Feliz Navidad guys,” and the bill was whipped off our table from the US couple sitting next to us. Wow. Oh my gosh. We talked for them a bit more and found out they travel 80% of the time. He’s in telecom and they’ve seen a lot of the world. They currently live in Buenos Aires right now. We recommended the Chocolateria where we were then headed. That was super nice of them and they were really cool too.

We then ran into the US couple again and told them the Chocolateria was closed after they asked about it (she was like, “ahh no!”) but that it was open tomorrow till 11 pm.

Anyway, an end to our backpacking journey. Where to next, Machu Picchu?