We woke up early this morning to catch our 7:30 am bus back to El Calafate. After a bus stop at the same café and a 3 hour ride (yay for sleep), we got back into town. Kathleen met Chris and Chase on the bus who I then later met. Chris is a leadership consultant and Chase is a lawyer. They’re based in the San Diego area. Top two favorite places of Chris’: Alaska and Jordan. Jordan has always been on my bucket list and Alaska was added right after experiencing Antarctica and briefly talking to Steve and Gannon about it.

They, like us, were trying to catch the 1 pm tour bus to see the famous glacier, Perito Moreno. After finding out the shuttle would not be coming to the bus station on Christmas Day to get to our hostel, we decided to walk. It was only about a 10-15 minute walk with our packs on. We checked in and they tried calling with no success on getting us in that tour. But we weren’t going to give up. So we went to the different tour companies along the road (all which were open on Christmas Day) and one of them said that we were in luck! A few people had just cancelled 5 minutes ago and there were 4 opened spots on the bus! She quickly booked it for us, and then we showed her our passports and paid. Wow! We only had an hour till we left so Kathleen quickly got tarts and empanadas to have for lunch while Kim and I rushed back to the hostel for warmer clothes. It was funny though because at the bakery shop we ran into the guys again and they had been able to get tickets for a 1:45 pm boat ride.

So there we were. Tres Chicas (we were called this often) going to see the Perito Moreno Glacier. The bus ride there was about an hour ride (again, sleeeep, yessss). Once we got there, it was raining and we got on the boat and took the ride. Everyone rushed out to see the glacier. “Ehh,” was our first impression of it. Compared to Antarctica it looked like no big deal. But then after the boat ride we got back in the bus which brought us to the walking portion. That was impressive.

This glacier was HUGE!!!! And then all of a sudden we heard a large CRACK which sounded like thunder. It was the glacier breaking apart. Cool! Though it was wet outside, it was still a sight to see. Okay, we were definitely glad we went 🙂 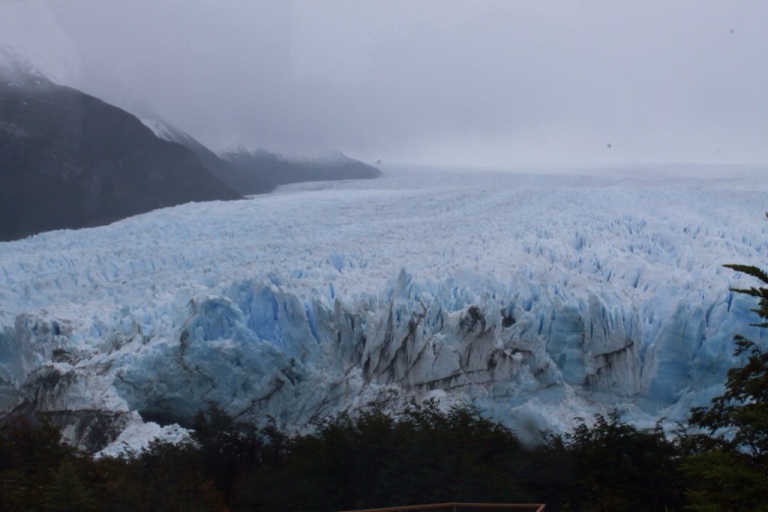 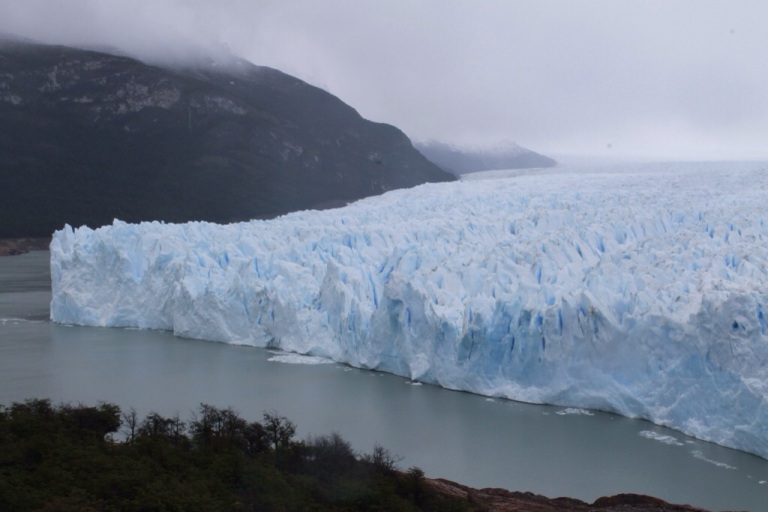 Some fun facts about the glacier:
– 97 square miles (or 250 square km), and 19 miles (30 km) in length
– Height is 240 feet (74 meters) above the surface of Lake Argentino
– Ice depth of 558 feet (170 meters)
– The terminus (end) of the glacier is 3 miles (5 km) wide
– Named after Francisco Moreno, an Argentine explorer and scientist who defended Argentina territory
– Location: Los Glaciares National Park in southwest Santa Cruz province of Argentina on the border with Chile. The park is comprised of an ice cap in the Andes range that feeds into 47 glaciers. Antarctica and Greenland are the largest ice caps, and this one comes in third.
– One of three Patagonian glaciers that is growing
– UNESCO declared the National Park a “World Heritage Site” in 1981
– Ice blocks often detach and it sounds like a large roar of thunder 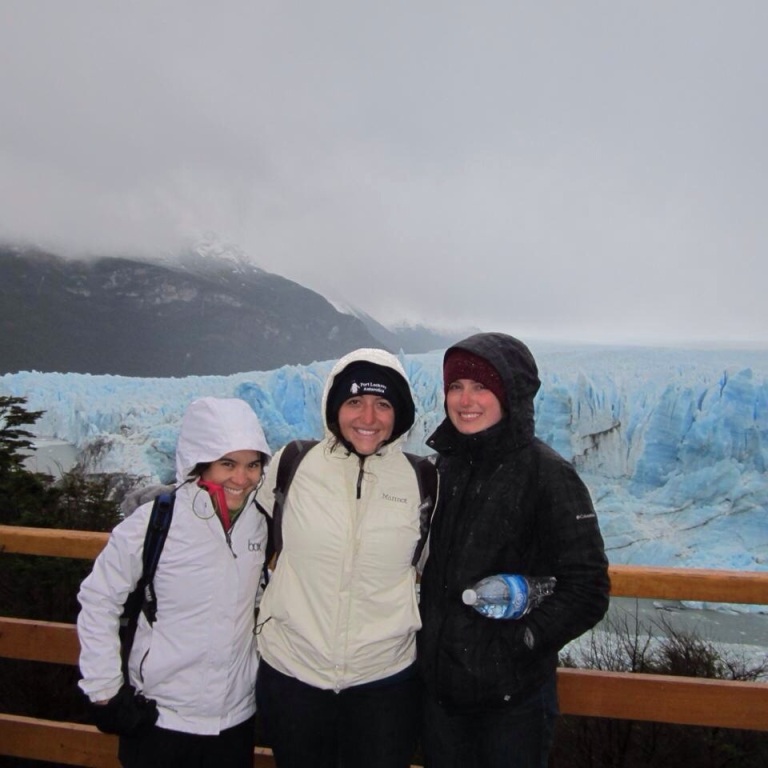 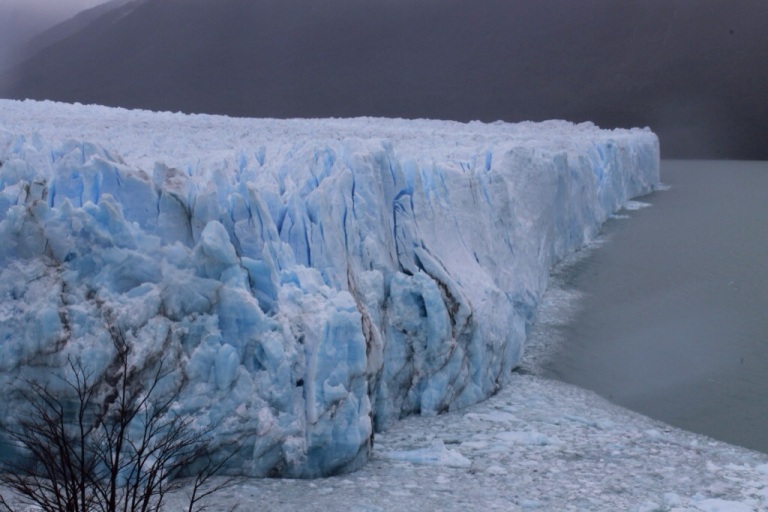 Our return bus didn’t come till 7 pm so we sat (with many other people since they were waiting too) in the café where I got tea and Kathleen and Kim enjoyed some hot chocolate. It was nice to sit and chat. We saw Chase and he came up to us and we found out they made a mistake and had to catch an earlier ride back since their current one would bring them home too late to catch their flight. Then Kim pulled out Christmas gifts and she gave Kathleen a penguin souvenir and I got a maté book which I’m excited about since I got the mug and Argentinean maté (everyone drinks it here and I tried some of Liz’s on the boat and Gus and Nate told me a little bit about it too). Apparently I bought about 4 cups worth of maté but honestly I don’t think I’ll put half a cups worth of maté per mug (it looks like that’s the amount you put in), instead I’ll try with a few tablespoons at first. I hope that tea gets through customs and they don’t tear apart my bag. Anyway, that was super sweet of Kim.

We took the bus ride back and then walked the street to find a restaurant. We finally found a wine bar that was still full but I put my name down and Kim asked the bartender for a round of the Calafate berry liquor. It was quite good. Sweet too. Okay, and who did we run into? That honeymoon couple from Michigan who we had seen 5 times previously! Telling you, these towns are small. The lady pointed to us and said, “Tres Chicas!” We sat down and ordered and chatted to the couple again before they had left. We had a delicious Christmas dinner. Kathleen and Kim got desserts which were spectacular and I got dessert wine which we think was ice wine. Yumm.