Chris organized an amazing weekend climbing trip to Pinnacles National Park. I had never been there before but Googled imaged it and it looked cool. I signed up. 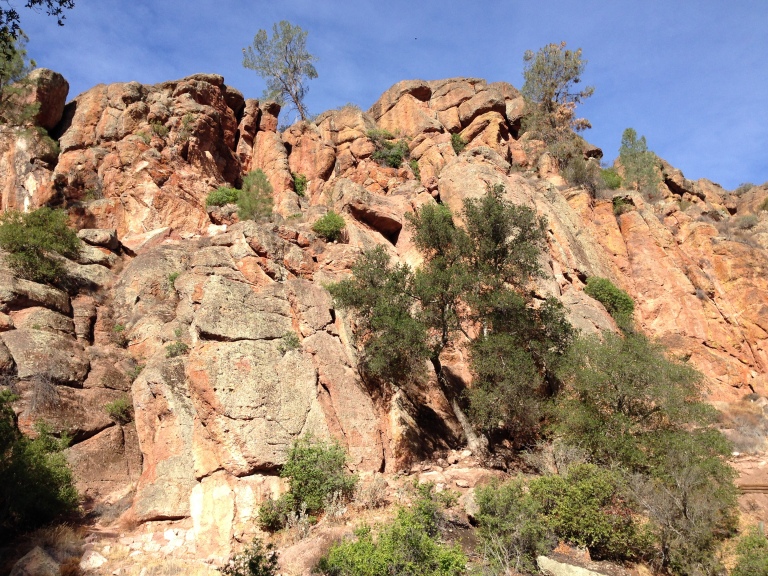 I knew Gavin, Todd and David on that trip, but the rest of the crew I had never met before. Should be fun though, I thought! I’m sorta a beginner climber so was hopeful there would be beginning climbs on the trip which Chris said there would be.

David and I headed out from Box together, and stopped at Chipotle on the way down (Pinnacles is southeast from here). After about a 1 hour 45 minute drive, we arrived. It was pitch black outside. We signed in, got a parking sort of ticket for the car and found our campsite. We decided to just park and eat Chipotle…yum. We were the first ones there. We then set up camp…David let me use his tent as he was planning to sleep in the back of his car. Thank God I had bought a sleeping pad from REI that same day, or I would have been super cold. It wasn’t tooooo cold though outside. A lot warmer than Yosemite.

We walked around the camp, headlamps on in order to explore. And then there were raccoons! David kept yelling / stomping at them to go away, but there were a few…thankfully he was successful at it!

Chris, Josh, Graham, Peter, Gavin, Michael, Matt, Emma, Todd, Francine, Brandon, Giraffery, and Jess then arrived. They set up all their tents, we hung out and chatted for a few hours. Chris, Josh, Matt, Michael and I decided to go drive somewhere and take pictures (Josh and Matt are amazing photographers). We spent over an hour there taking pictures of the starry night…pretty cool.

The next day we woke up and had breakfast – wild Alaskan smoke salmon, organic peanut butter, bagels and cream cheese, Indian fritter pancakes. I mean, seriously, I think I ate better on this camping trip then at home! Yummm.

We got our gear, drove about 10 minutes away and started the hike towards the areas to climb. We went to Discovery Wall. Gavin led the routes and the first one was a 5.6. It was doable, just the first part was a little tricky but not that bad. 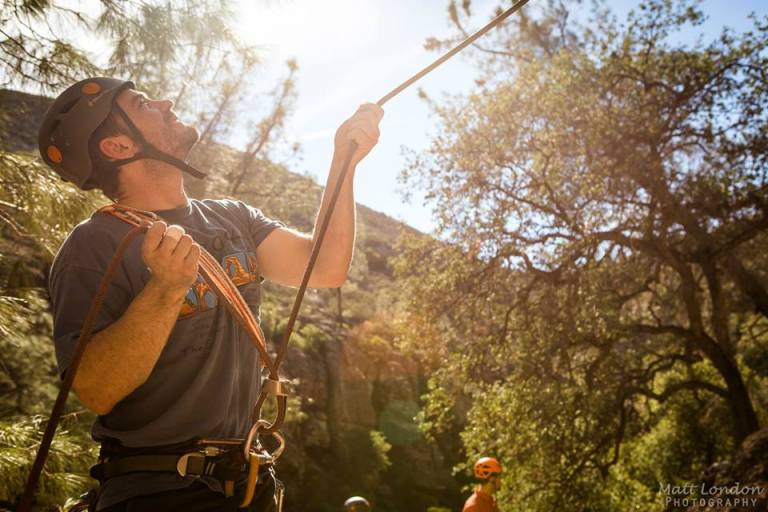 The second route was Wet Kiss – a 5.9. Yeah, that one was hard. It took a while, but I finally got up it with Peter belaying me and his encouragement the whole time. Really appreciated his patience during my way up to the top of that route. 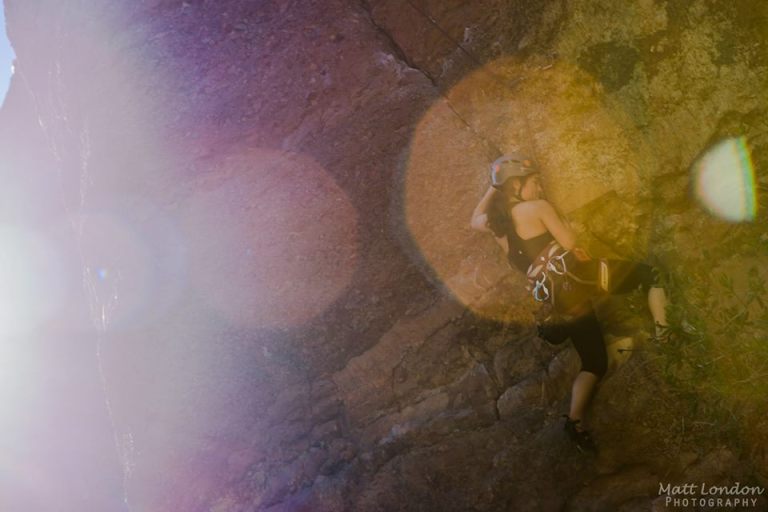 I did Portent a second time as Gavin made it longer. We then decided the last route of the day would be Portent again but that it would be a multi-pitch climb (a 2-pitch climb) with David, Gavin and myself. When we were mid way, my nerves kicked in as we were switching the ropes. Gavin knew exactly what he was doing though, so I had faith. The ropes were set again and Gavin led the way up. I followed. 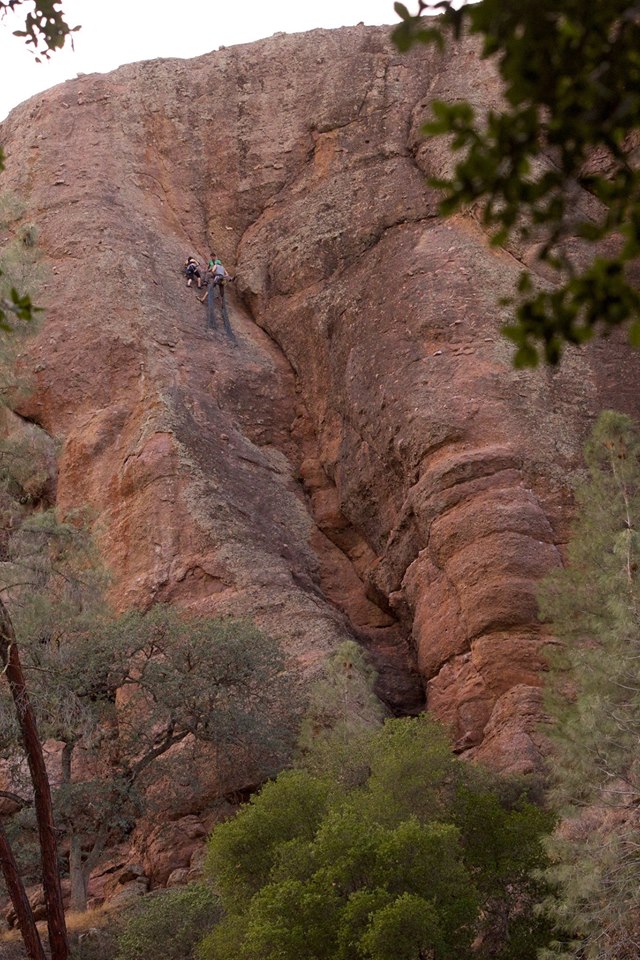 When we neared the top, it was a bit scary as you’re looking completely down. But I could hear Gavin, Michael and Brandon up there and they reassured me I was almost to the top. I got there and the view was beautiful. David then came up right after me. Matt had taken a few shots of us just sitting there.

We then rappelled down. It was my first time. Jess warned me not to get the ATC stuck in my hand…and what happened? I got the ATC stuck in my skin. “Shit!!!” I cried. Yup, that hurt. I had this black and blue and pinched skin on my hand. Oh well. Learned the hard way, and I think I’ll wear belay gloves next time. Belaying down was pretty fun. 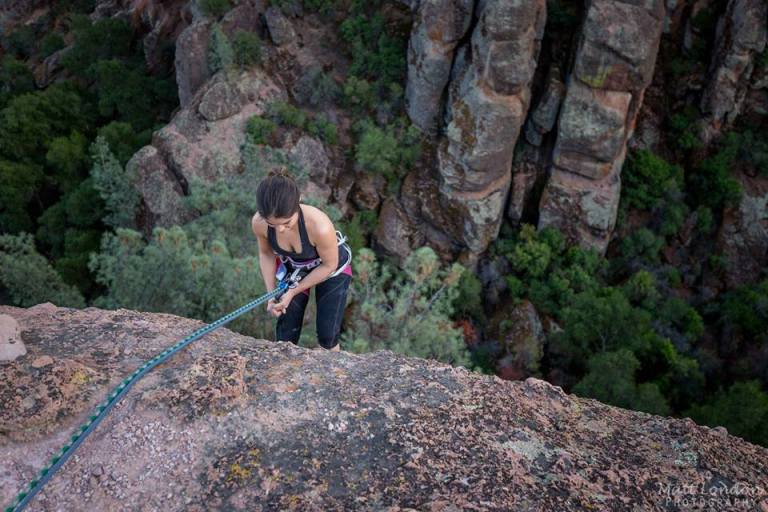 That night we had wild arugula salad, quinoa mac & cheese, lentils, and more. Fancy. I was exhausted and called it a night.

The next day we went to Upper Crust. It was a trek to get there since we got a late start (we had to pack up camp and we leisurely enjoyed breakfast).

So we were in no rush, but that meant we lost all the parking spots. It was a couple hours (actually maybe 3?) of a hike to get to where we wanted to go. Michael was determined to climb that day since he was holding a ton of gear. We even went through the caves which were cool!

After passing other rock climbers and asking them about availability, we finally made it to Upper Crust. Gavin led a 5.8 and 5.9.

I used the other rock “wall” to climb up the 5.8 at the beginning. The view, again, was spectacular. The 5.9 was really hard and it took me a while with some falls in the process, but eventually I made it up. One thing I love about rock climbing is the patience and encouragement that the people on the ground are giving you as you go up the rock. They won’t let you back out if they know you can make it up there. This route was in particular really hard, but I’m so glad I made it to the top.

We then packed up and headed back. Michael, Matt, Emma, Gavin and I squeezed into Michael’s car. Matt DJed the whole way back – geez, I haven’t listened to some of that music since I was in high school…it was awesome. After dropping off Emma, the four of us headed to a Mexican place for a burrito – sooo good.

What an amazing weekend it was.