My friend Lan invited me to go with a group to Yosemite. It was a total last minute trip, but since my backpacking plans to Yosemite had gotten cancelled earlier this year, it was a definite must as it would be my first time.

I had no idea where we were staying, what hike we would go on, etc. Kinda spur of the moment type of thing.

We met at the CalTrain and headed over to her friend’s place. We then left his place with two other of his friends and headed to Yosemite (after a Costco run that is). We got there at 1:30 am. And looked for our cabin, and looked for our cabin, and yup, looked for our cabin. Lan and I were busy chatting away in the back seat while the three of them discussed where to go. I had been messaging Todd who was there with Gavin (they were on a climbing trip) to let them know where we were staying. At one point in time the guys locked the door, I opened the door and all of a sudden the car’s alarm went off. “I just did that,” was my next message at 1:31 am. Thankfully, Curry Village is huge and probably only 30 people awoke in the middle of the night. We found our tent 2 hours later. Not kidding. We went to bed at 3:45 am. Seriously, it was freezing. The one place you could warm up was in the ladies restroom by the heater on the wall. Sounds weird but when it’s crazy cold outside, chatting with a friend while defrosting is good in my book.

That “same” morning we woke up at 9:00 am, got ready and started hiking at around 10:45 am. Okay, that was a super late start. After mile 4 the group separated. Lan and I went to mile 7 and turned around. It was actually a loop and the other 3 kept going but we didn’t know where they were. It was an absolute BEAUTIFUL hike and we caught up on everything life…was a great conversation for 6 hours! Fun fact is that the two of us are from New Hampshire. We definitely want to go again…we’ll probably be the planners though next time. 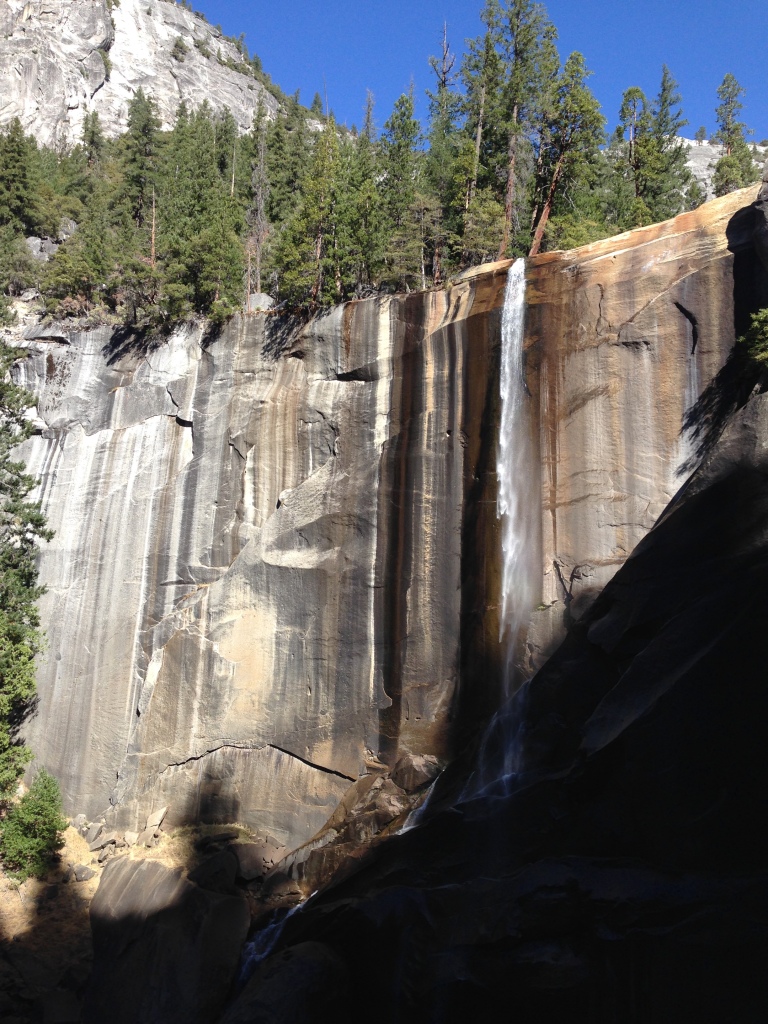 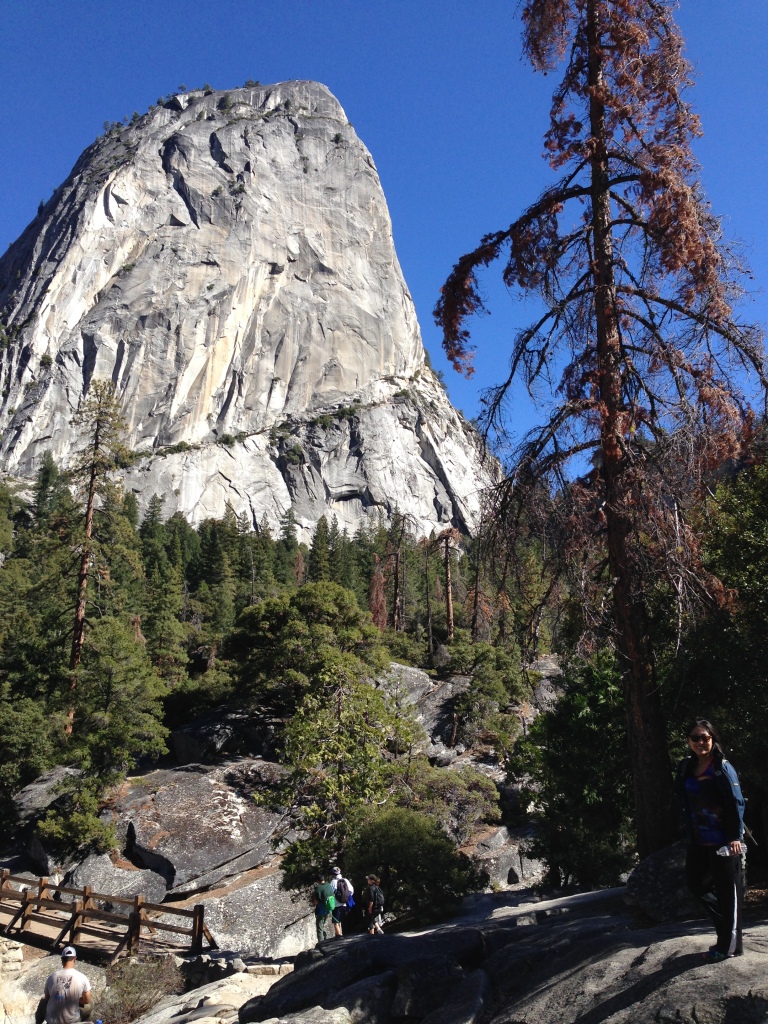 I had cell service in and out of Yosemite. “At curry village pizza patio. We’ll be here for about an hour then we’re heading back to SF tonight. Phone is dying” was Todd’s message. I let Lan know and immediately we were like, Hmm, maybe we can catch a ride with Gavin and Todd. The other three had no plans for tomorrow, no idea when they were getting back, and if it was a trip like coming up here where we were lost for a good 2 hours then we preferred to pass. 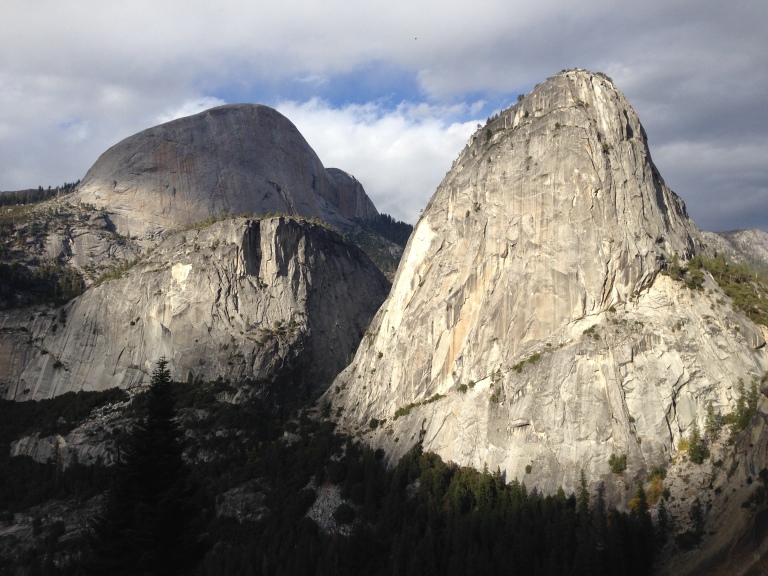 We got back, figured we missed Gavin and Todd, and headed for dinner. I got a text from Gavin an hour into dinner and found out they were 2 hours out of Yosemite. (You actually don’t get cell service for the longest time driving out of Yosemite…and my cell service kept going in and out…Lan had none).

We were determined to go home though. Don’t get me wrong, Yosemite was amazing, but we didn’t have a plan in terms of what to do the next day, and when we were leaving home. So after chatting with the front desk to see bus options (there was no good route…it would pretty much be a bus to Merced then Amtrak then Caltrain…are you kidding me?! Not worth it), we decided to either a) go hiking the next day and enjoy ourselves or b) get a ride home. The next morning we woke up at 7 am, headed in for breakfast and decided to hitch hike a ride. We asked 10+ groups / couples. First was an LA group of people probably in their mid-20s. Then was 2 girls who were from Europe, leaving that morning but heading somewhere else. Then 2 guys who were heading home too but in another direction. After asking over and over, an hour and a half later (seriously, this was the last couple we were going to ask), Lan talked to a guy and he said, “let me check with my wife.” I was in the front desk area and she ran in, “We got a ride!!!” Okay, I have never hitchhiked before. But they were SOO COOL.

Romain founded Vélo Gourmand which he described as a tourism company – basically they combine food and bike rides around France (touristic and gastronomic cycling tours)! Super cool. I want to sign up one day. Maria works in marketing for a ski lift company. They were visiting the United States (already did the east coast) and now the west coast. We chatted the whole way. Romain and Maria have never given a ride to strangers before (I mean they do in France, but they said it would be like a 5-10 minute drive). They live in Chamonix, France. They were asking us about slang phrases too which was pretty funny, like never say “Frisco” or “San Fran” and the meaning of “totes” and “probs.” We made them a long list of places to visit in SF from neighborhoods to restaurants to bakeries to things to do:

Romain and Maria drove us to Lan’s place. Then after dropping her stuff off, we headed to Mountain View where we met Robin, Barbara, Adam and their friends to see a bit of the concert. Again, it was cold! Haha. After hanging out then seeing more friends sitting elsewhere at the concert, we decided to have a delicious meal at a restaurant (after having lived off of trail mix Saturday). Great weekend overall and was exhausted afterwards.