I forgot how long it took to get from Zurich to Zermatt. Train from the airport to Visp, then train to Zermatt. Having been twice before it was familiar ground but it had been 7 years since my last visit. I have memories of it being one of my favorite vacations, hikes with beautiful views, eating lunch in mountain huts, and the World Cup playing. I was looking forward for years to go back and it finally happened.

It was another fam vaca – love those. I came in a bit jet lagged but we ate dinner at the hotel and woke up early the next morning. That day we did a hike to Furi where we ate at Blatten. I had cheese fondue.

The next we did a long hike from Zermatt to Grunsee, the third lake (of the Five Lake trail). Would advise to take the tram to Sunnega and start there. We hiked down from the third lake and ate at Chez Vrony.

Day 3 we headed to the Matterhorn glacier trail starting at Trockener Steg and hiking to Schwarzsee.  It was super rocky but the views of the Matterhorn, lake and glacier were gorgeous.

Mom and I (dad worked that day – meanwhile this was the one vacation I decided to delete my email off my phone and NOT bring my laptop) went to Riffelberg to Gornergrat, then trammed to Riffelalp and ate at Al Bosco (but Al Bosco was super commercialized it felt like).  I couldn’t communicate German (I realllllly want to learn!) and was asking the guy how much it was to take the train to the restaurant. Because we misunderstood each other, we decided to walk and it was only 200 yards! The tram was more of a show LOL. Anyway though, Gornergrat was gorgeous – I loved that hike. That same day we had run into a Belgium family 4+ times during our one hike (and we had gone different ways!). I wish I got their contact info – they were the ones who convinced me I should go to Hörnlihütte. Originally met the whole family grandmother and their daughter who was pregnant we saw in the morning and now after lunch we saw the parents and their son…and then we saw them about 1.5 hours after lunch again) – we hiked a good portion together and they brought us to the chalet they were renting so we could take the mini elevator down which was sweet. We then walked to town together as well as they were getting groceries.  They told me they were hiking Hörnlihütte tomorrow and their son was heading back to Congo.  But I had in my mind already I needed a rest day the next day, especially when everyone told me that the hike to the Matterhorn base camp was quite difficult and dangerous. 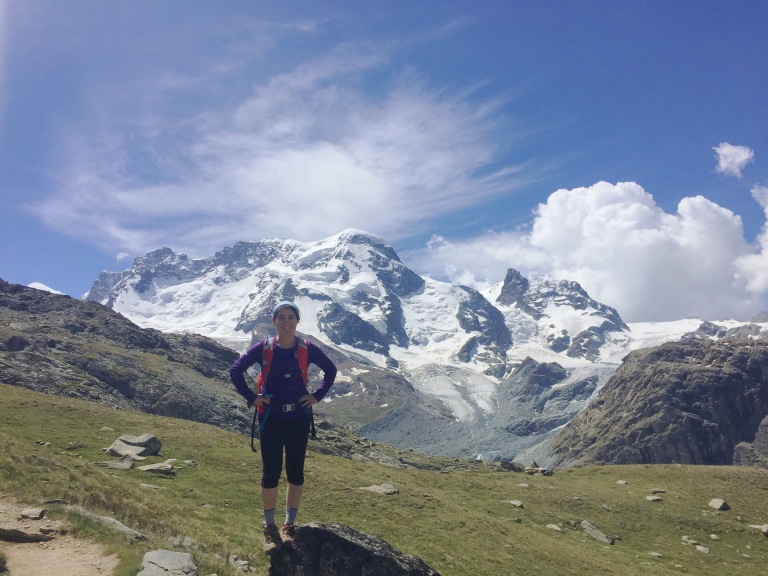 Day 5 – rest. It was nice to just hang around the town. I had looked into rock climbing over the next few days, but there was no one who signed up to join. If I did a personal guide instead, it would have been a lot more $$ so I decided to not do it. Always next time…or somewhere else, I had rock climbed in the Dolomites years ago before I really even knew how to climb.

Hörnlihütte = Matterhorn Base Camp. I was going. Even though I knew my dad didn’t want me to. We had heard from a bunch of people the hike was dangerous, and that if you fell off, well you were done for. The map labeled it as red which meant difficult. I had watched a couple of youtube videos the night before and was a bit nervous. And there we were, my dad and I having breakfast at 7:15 in the morning in the hotel. He knew when I’m determined to do something, I do it. And then some other hotel guest came by and he was getting breakfast too. Hmm, he’s early I thought to myself. The three of us were the only ones in the restaurant. We chatted and found out his name is Tony and he was planning to go to the base camp – he had done it in years past. After a couple conversations before and after breakfast, we decided to meet in the lobby and head over together. I knew my dad was super happy I wasn’t going by myself – yeah I’m 30, but still his daughter to him 😉

Tony and I got the tram to Schwarzsee and started the hike. He is sooo cool. We chatted about treks, business, life and love (I’m so glad I got to meet his wife and daughter before they left Zermatt – they’re an amazing family and their daughter reminded me of myself when I was her age). We kept hiking and the views were gorgeous. There were ropes to hold on to and enough space so it wasn’t like you were right on the edge.  “Aw this isn’t that bad!!” I thought to myself. So worth it. Any Tony was great company, I was fortunate I had him as my hiking buddy that day. We made it to the base camp and WOW, the Matterhorn was right there! We soon met Nico who we discovered had summited with his guide Thomas. And inside we had a drink and snacks with Charles and Barbara from Switzerland and bonded with Nico hearing about his summit. I told him I worked at Google and he thought it was the coolest thing ever and I was like, “dude you summited the Matterhorn! That’s wayyyy cooler.” Tony and I hiked back to Schwarzsee and took the tram – I was debating whether to hike the full way back to Zermatt but it had started raining a bit and I slipped, which told me “alright, yeah I should just take the tram.” We then had a drink at the Schwarzsee hut and saw a group who had summited Castor and Pollux.  “I want to do that,” is what I thought to myself.  Overall it was one of the best days (though to be honest, every day was really an amazing day each one just really different). 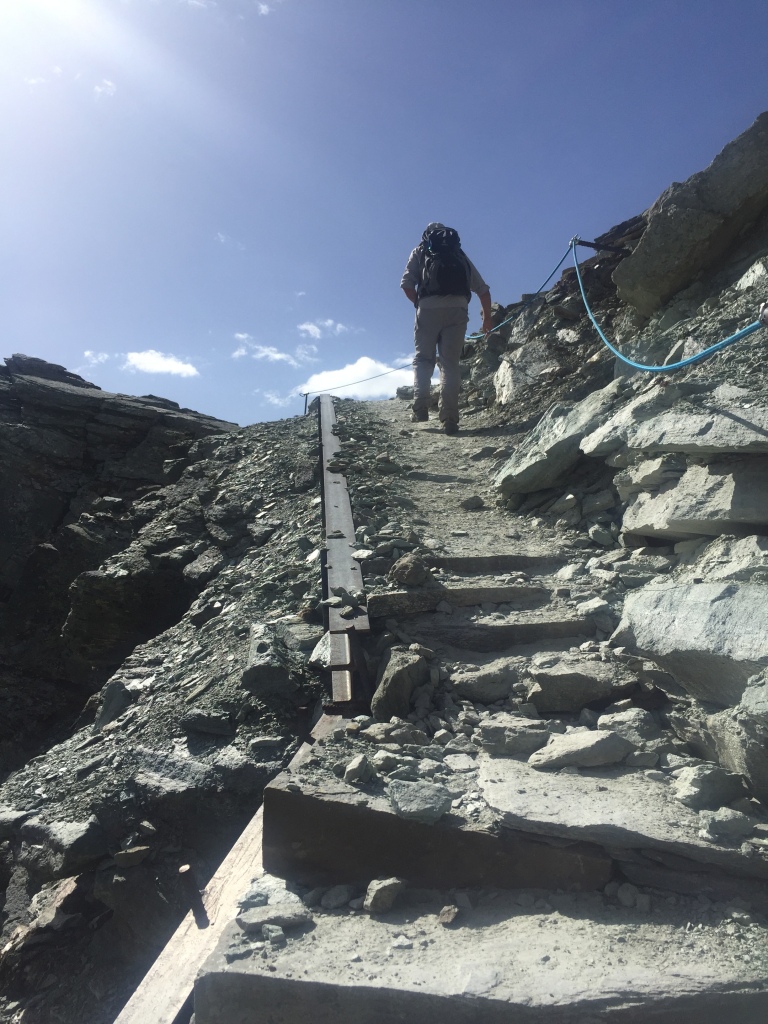 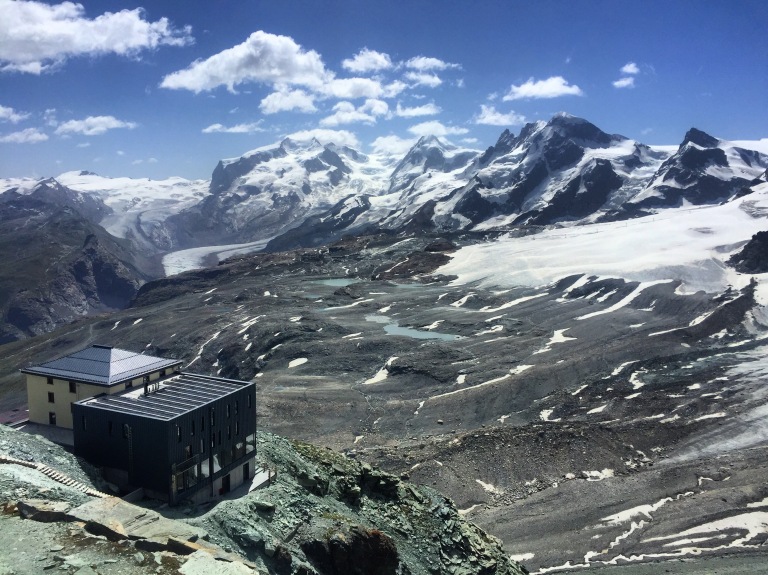 Mom and dad hiked the Riffelberg to Gornergrat hike. 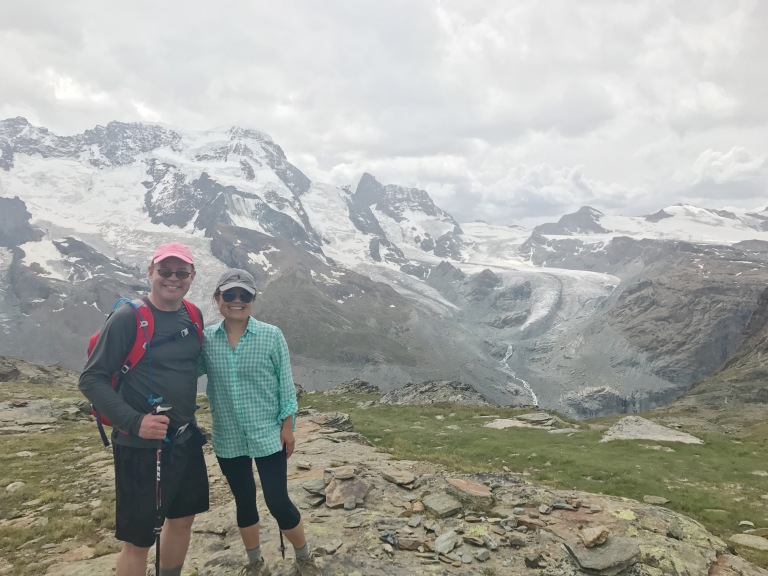 Zum See!  One of my favorite places – their food is amazing and oh ma gawd, their rhubarb pie and cinnamon ice cream – let’s just say they had that back in 2010 and it’s still delish! YUMM. This day we hiked past the dam, and literally, it was so damn hot. Zermatt to Furi to about Zmutt. Someday maybe I’ll go to Schönbielhütte. 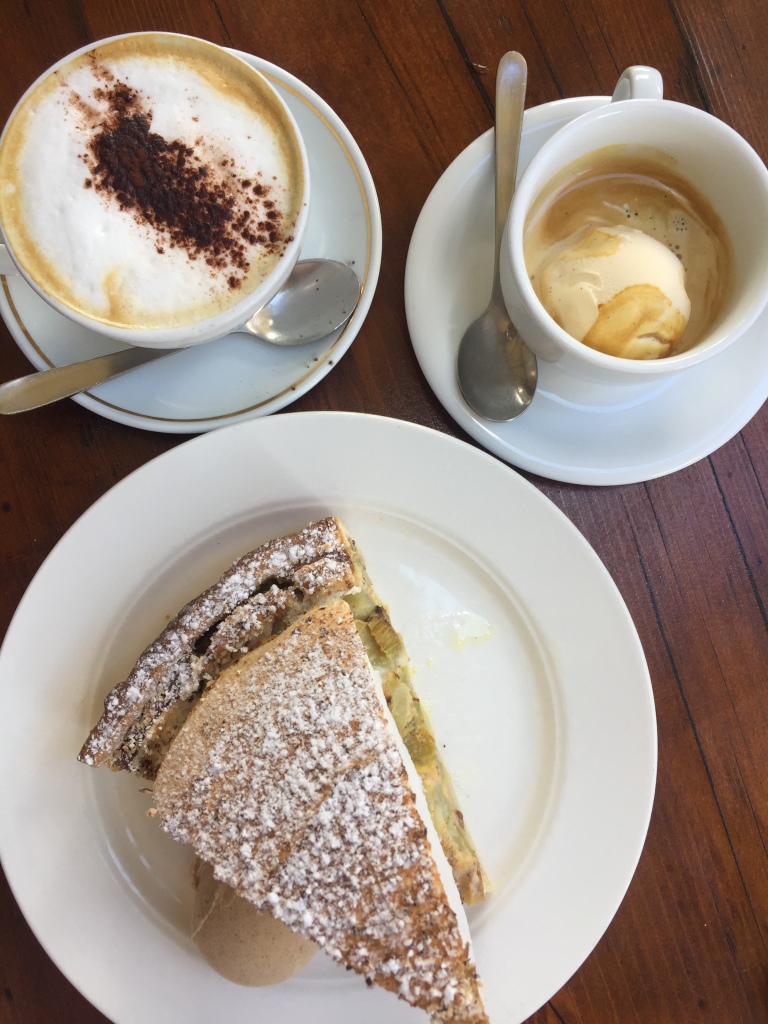 Day 8. Decided to hike to Edelweiss Alterhaupt but didn’t quite get there. It was thundering and raining. We passed a couple on the way down who was going really slow. My mom said she wanted to turn back. And we did, and finally met up with them. We hiked down with them, my mom having the most patience in the world as the elderly gentleman took his time step by step carefully down. They were super appreciative of it. Mom told me that she was fearful of one of them having a fall and not getting back safely.  After a half hour of walking back, we then took them to our hotel so they could take the elevator down to the town rather than the stairs in the rain. They were so thankful – I always see my mom doing these sort of gestures and it puts a smile on my face. 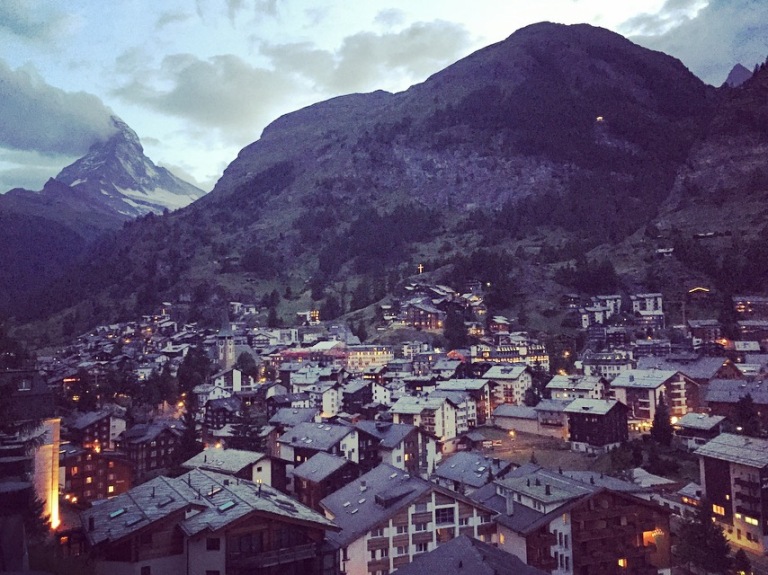 Almost the end 😦 We took the tram to Rothorn, walked around, took in the views, then trimmed to Sunnegga and hiked down to Findelhof where we had an amazing meal. Then hiked back to Zermatt. 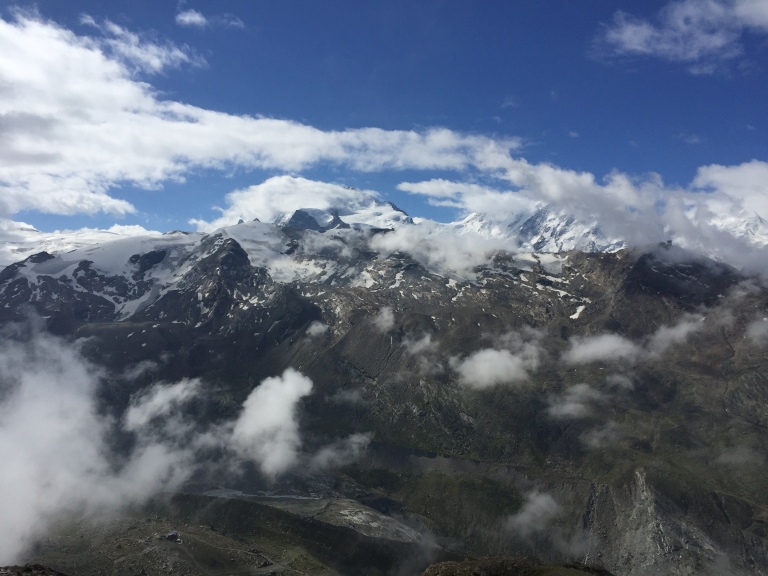 The next day I headed out super early – 2 trains then flight to Germany then flight to SF. It was probably one of the best vacas I had in my life (up there with Antarctica).